Historical information about the Thwaite. surname.Recorded in a number of spellings as shown below, this is an English surname but one of pre 7th century Norse-Viking origins. It may be either topographical or locational, and is derived from the word “thveit”, meaning a clearing or farm. As a topographical surname, Thwaite(s) denotes residence in or by such a place whiilst as a locational surname it originates from any one of the various places called “Thwaite”, found in several parts of Northern England and East Anglia to the south. The surname development from ancient times includes examples such as Alan del Twayt of Yorkshire in 1301, Robert del Twaytes of the same county in 1379, William Twaytes of Suffolk in 1492, and Matthew Thwayts of Oxfordshire in 1618. The various ‘modern’ spelling forms include Thwaite, Thwaites, Thwaytes, Thoytes, Twaite, Twatt, Twaites, Tweats and Twite. The plural forms denote “of Thwaite” and are similar to the French ‘de’. An example of a recordings taken from surviving church registers is that of the christening of Thomas Thwaite, the son of John Thwaite, on January 22nd 1461, at Lofthouse with Carlton, in Yorkshire. An early coat of arms granted to the Thwaites family of Marston in Yorkshire, depicts a gold fess between three gold estoiles on an blue shield. The first recorded spelling of the family name is shown to be that of Ralph del Thweit. This was dated 1206, in the Pipe Rolls of Norfolk, during the reign of King John of England, 1199 – 1216. Throughout the centuries, surnames in every country have continued to “develop” often leading to astonishing variants of the original spelling. ‘ Copyright: Name Orgin Research www.surnamedb.com 1980 – 2010.


Thanks to Jim Humphrey in Australia for information about Marmaduke Thwaites. {June 2020]
He would welcome help with his research into this family. Marmaduke was living in Grewelthorpe in 1741, and had as far as I can see 7 children John 1737-1817, William Thwaites 1739; Mary 1741; Thomas 1744-1811; Jane 1748; Marmaduke 1750-1811; Edward 1753-1836. I am trying to follow up in these children. But I believe Marmaduke moved to London as he is listed at the Tower, and also served on a Coroners Court in LOndon. He had a son Edward who was baptised at St Dunstans in the West 16 October 1785. If you have any additional information please could you advise me. Thank you. Jim Humphrey
Jim’s email address is jimhumphrey@bigpond.com 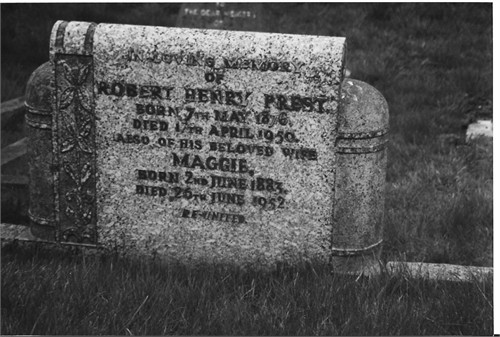 Robert & Maggie [nee Thwaites] Prest.
Thanks to Joy Hatchett for photo.
Adrial Walton has sent the following request for information.I am interested in the Thwaites family which I am researching on behalf of a friend. On the Grewelthorpe genealogy website is listed a John Thwaites, born 1880. I know that he married Hannah Maria Jones in June 1913. On the marriage certificate his occupation is given as woodman, hers as domestic servant, the 1901 census has him entered as a stocksman. It therefore seems possible that both John and Hannah Maria were employed by a large house or estate at the time of their marriage.The witnesses of the marriage were Robert Henry and Maggie Prest. This would appear to be the Maggie Thwaites mentioned by Mark Andrew in his post to your site dated 7 Jan 2009. She was John’s sister.Hannah Maria’s father is given as David Jones, a collier, and I understand from my friend that she came from Wales, though exactly where is not known. The combination of names and occupation is by no means unique so that I have been unable to identify her family unambiguously from census returns. I therefore wonder if records survive from any houses or estates (Hackfall?, Bramley Grange?) in the area which might give more information about employees. I would be very grateful if you have any suggestions or if you could put me in touch with anyone else who might know.
Many thanks for any help you can give on this.
Thanks to Stewart Hall for information about the Thwaites & Hall families.
Also from school, census & Parish records. 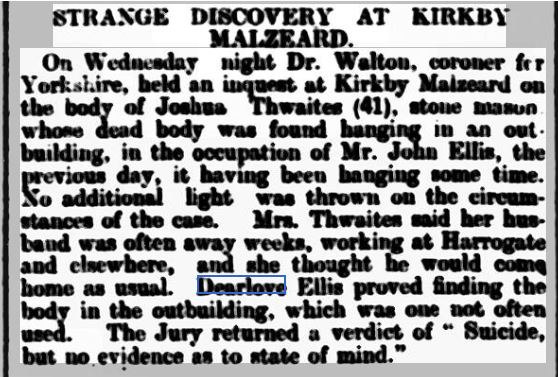 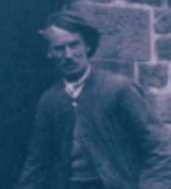 MARGARET THWAITES. Born C. 1870 Galphay Woods. Dau of Edward & Elizabeth.
MARMADUKE THWAITES. Born C1710. Will proved 13.2.1757. Married Elizabeth Mann of Grewelthorpe in 1731. He was a sieve maker. It is thought Marmaduke moved to London. He served on a Coroners Court in London. It is thought he had 7 children. See letter from Jim at top of page.
Excerpts from the will of Marmaduke Thwaites. dated 1756.
To my eldest son John my House & Garth formerly left to me by my uncle John Thwaites being at Grewelthorpe. He paying my second son William £20 on his attaining the age of 21.
I give and bequeath to my son Thomas Thwaites £20 on his attaining the ge of 21.
Ditto to son Marmaduke Thwaites
Ditto to son Edward Thwaites
Ditto to daughter Mary Thwaites £15 at 21 years of age.
Ditto to daughter Ann Thwaites £15 at 21 years of age.
If any of the above mentioned children should die before me their share to be divided equally between the rest of my children.
I give and bequeath to my dear wife Elizabeth the profits of all other my lands and tenements except the house and garth above mentioned. If my wife shall marry again then all to go to my eldest son John Thwaites his heirs and assigns for ever. He paying all above mentioned legacies and paying £4 yearly to my wife for the rest of her life.


Report in Ripon Gazette October 9th 1913.An inquest was held on the body of Thomas Anthony Thwaites. aged 24years of Grewelthorpe, a carter in the employ of Mr. Hubert Greenwood. of Bramley Grange. who died in hospital on Monday afternoon at 2-30p.m. as the result of being thrown out of a milk cart that morning. Deceased had left the farm at 8-30a.m. with 10gallon of milk to take to the dairy and he also had 3 school children in the cart. Shortly after leaving the farm the deceased struck the horse, which jumped to the opposite side of the road, breaking the back band of the harness. The shafts of the cart were broken off and dropped to the ground and the deceased was thrown on to his head. Dr. Harvey. of Kirkby Malzeard was sent for and advised deceased’s removal to the Cottage hospital where he died from a fracture of the skull.John Thwaites. of Grewelthorpe stated that the deceased was his brother. About 12 noon the witness was sent for to see his brother who was in a barn at Mr Coldbeck’s Bramley Grange. he was then unconcious. In the meantime the ambulance had been sent for and about 1-30p.m. the deceased was removed to hospital. The witness accompanied him.They reached the hospital at 2-25p.m. and witness stayed with his brother who died 5 minutes later. the deceased was used to horses and had previously been engaged timber leqading with three horses.Mrs Mary Jane Coldbeck. of Bramley Grange, Grewelthorpe stated that on Monday morning she was on the Bramley road about 8-45a.m. just below the gate of her house, a little girl was with her. They were gathering brambles. Deceased came down the road with the milk cart. It was an ordinary spring cart and deceased was driving the horse which seemed as if coming to a standstill. the horse did not shy. The horse was coming down the hill in a sleepy sort of way, when deceased struck it with a stick. The horse bounded forward and got off the road. The wheel on the nearside went over some sidings and then into a gully at the side of the road. The horse cleared the cart & harness, the shafts were broken and the horse had nothing left on but the collar & reins.There were 2 of Mr. John Thackray’s girls in the cart and Mr Greenwood’s little boy. These were thrown out except the boy who sat in the bottom of the cart. Witness found the deceased sitting in the middle of the road. He was moaning but did not speak. Wtiness’s husband and Mr Armstrong were within call and she went for other help. She returned a few minutes later and deceased was laid on side of road. He was then vomiting but did not speak. He was moved to Mr Coldbeck’s Barn with the help of neighours.Mr Hubert Cook Greenwood. of Fir Tree House, Bramley Grange, farmer, stated that the deceased had been in his employ and had been with him about 10 days. At he time the accident happened he was taking milk to the dairy at Kirkby Malzeard, and had been in the habit of doing that. He had had no trouble with the horses before. It was a quiet horse, 5 years old. It had however run away in the Spring thro’ carelessness. It was not a high spirited horse, but rather nervous. It had taken milk to the dairy from being 2 years old.The Doctor reported that here had been a delay of an hour and a half in starting with the message for the ambulance owing to the difficulty of findong a horse, and it was 11-20a.m. before a man se off to Ripon. He attributed death to compression of the brain caused by a depressed fracture. The jury returned a verdict that deceased was accidentally killed by being thrown from a spring cart and died from compression of the brain the result of a compressed fracture.