Letter from Brian Hogarth [Nov 2018]. —- doing a bit of research on Alfred Hall who certainly had a connection with Masham, as I have in my possession a pewter teapot presented to him in 1902 by The postal staff of Masham when he left that service.
It came into my keeping upon the death of my aunt who was his grand daughter, when I cleared out her home in Bishop Auckland 5 years ago.
Her grandfather (on her mother’s side) served with The Green Howards in the Boer War so I suspect he enlisted in 1902 hence his leaving the postal service. He had a service medal from that conflict which I donated to the Green Howard museum in Richmond as was my aunt’s wish.
I am not sure of his life thereafter but he lived in Spennymoor during WW2.
I have no information at all about his marriage but he had one daughter Margaret or possible Marjorie who became Thompson upon marrying. They had one only child; my Aunt Joan, born 1938.
Margaret was widowed in 1942 when her husband was lost overboard from a destroyer.
— if there are any remaining Hall relatives I would like them to have this teapot.
I have no connection whatsoever with the Hall family myself. My aunt had no children so no-one to pass this onto.
I also have quite a few of her father’s war records so perhaps this might also be of interest.
If you can put me in touch with anyone I will be very grateful.
If anyone can help Brian please contact the site.

JOHN HALL. Born C1827 Catterick. Son of William & Esther Lane. Married Susanna Brand of Richmond.
He was a mason & builder.
JOHN WILLIAM HALL. Born C1860 Kirkby Malzeard. Son of Thomas the mason & Ruth. Married to Mary Annie
in 1885. They had 5 daughters. He was a stonemason. 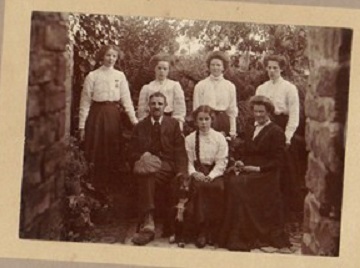 Advert for house sale in 1945. Main Street Grewelthorpe. I think this property was next to the old school.
Ref. Yorkshire Post. Probably Hannah Hall’s house.