Details of the Pickersgill family living in and around Grewelthorpe.Information taken from census returns and Parish records . Last update Oct. 2021

Shirley Cherry wrote [April 2018].
Henrietta Pickersgill was my late husbands grandmother. I would be interested in seeing the family tree which I believe David Pickersgill has prepared. He must be Barrie (my late husbands) cousin.
I sent her Dave’s tree. [Barbara].


Nicola Simpson is researching the Pickersgill family. She writes.“I am researching the Pickersgill family. I have traced back as far as John Pickersgill who I believe married Sarah Beckwith in Kirkby Malzeard in 1701. He baptised two children, Charles in 1701 and John in 1704. On both baptism records he is listed as John of Thorpe. He died in Grewelthorpe in 1704. Can anyone tell me if Thorpe is a different place to Grewelthorpe (there are other baptisms recorded as of Grewelthorpe on the same day)? And does anyone else have any information on this family? Oct 2011.If you can help Nicola please contact the site.


June Howell writes. Sept. 2011.In the P.R’s of Kirkby Malzeard I located the birth of my ancestor Joseph Pickersgill baptised 1803 son of George of Grewelthorpe. I also located the marriage of a Mary Metcalf to a George Pickersgill which took place in 1799. Joseph married Ellen Hood of Baldersby at Helperby and had their two first children Bt. there. Mary 1833 and George 1835. The family then moved to Dewsbury where on the 1851 census Joseph said that he was born at Ploverhill, Thorpemore. As the Metcalf’s lived at Ploverhill Farm Galphay I am assuming that it could be there. Does any one know about this family?.If you can help June please contact the site.


Thanks to Dave Pickersgill for access to his tree. [May 2012]. Some of Daves research differs from other information I have received. I have made a note where this happens.


Carol Metcalf has a lot of information about Isabel Pickersgill. Please contact the site To get in touch with her. [May 2012]


Thanks to Ian Williamson for information about Jennett Pickersgill. [Jan 2014].


Photographs sent by Paul Underwood of Torquay, April 2014 of a stone bearing the Pickersgill coat of arms, found in his garden.

Inscription says Quae recta sequor . I will only do what is right.

If you have any information we can add to this page please contact the site. 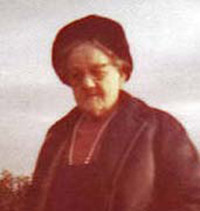 
David Pickersgill sent the following memories of Henrietta his grandmother.Henrietta lived at Laverton far some years, her house was the 3rd one down the road heading toward Ripon, from the church on the left, on the right was a farm that l believe was own by a German family with two children the same age as myself, one boy and girl, did not have much to do with the adults, but all three of us would play in the barn or in the field across the stream.Henrietta had 11 children in all. but the only ones I remember staying there when I was there was Richard, there was a stand pump on the main road with an old stone tub under it that I would get water out for the horse in the field behind the pump.l think twice a week a large van would come around selling food etc from it but on a Thursday, Gran and myself would walk to Ripon market and back.The toilet was a 10 gallon drum that was emptied every week, Henrietta would close the curtains until the wagon left. we had a large garden at the back of the house, and she would grow all her own veg and herbs, once when playing at the farm, the goat snapped the rope and butted me to the ground, the farmers wife took me home and gran went into the garden, got some grass as l called it, put me in the tin bath with the grass, five minutes no pain or anything.Gran never did like doctors, every week Gran was in the church next door helping out but she always called it the chapel.doing the search on the family, Edgar went from Ripon to Marton le Moor to work on the farms, but most of the males went into army and then worked on the land, George still own the farm at Copt Hewick,Charles Pickersgill lived at KM for all his childhood, but when he was 14, went to work at Studley Hall. 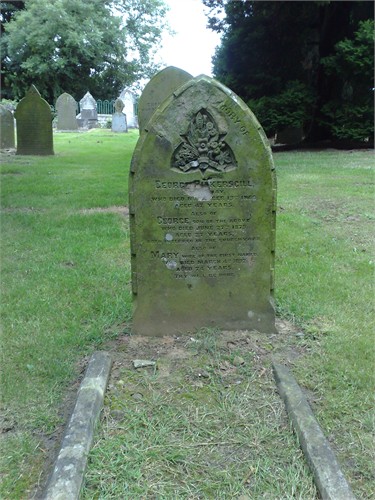 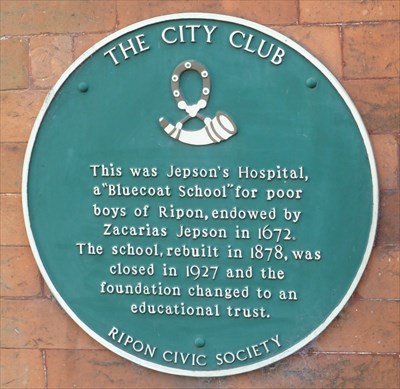 
ISABELLA PICKERSGILL. Bap. 10.3.1761 Kirkby Malzeard. Dau of Charles. [Ref.IGI.]
ISABELLA PICKERSGILL. Spinster of Grewelthorpe made her will 27.9.1851. [Masham Peculiar Court].
ISABELLA PICKERSGILL. Born C 1800. Buried 5.9.1851. Grewelthorpe.
ISABELLA PICKERSGILL. Born C. 1803 Grewelthorpe. Died Oct. quarter 1881. A laundress in Middleham in 1881. Sister of George.
ISAAC PICKERSGILL. Born 1676 Norfolk. Dau of John & Ann Wrigglesworth.
ISAAC PICKERSGILL. Born & Died 1880 Ripon. Son of Thomas & Mary Metcalfe.
JAMES PICKERSGILL. Born C. 1853 Galphay. Son of Christopher the carpenter & Elizabeth Gregg. He was a carpenter in Azerley in 1891. Married Alice Hutchinson. of Pateley Bridge in 1879.
The following information taken from ancestry.com site.
James was Joiner at Bewerly Estate for Squire Yorke. Lived in Pateley Bridge after moving from the village of Galphay near Ripon. Married to Alice . They had two sons and four daughters. Arthur died as a result of a sports accident (cricket or rugby). John worked in the quarries after leaving school (Bewerly). Moved to Kenton Quarry Newcastle upon Tyne . Annie married ? Derrick an Irish labourer involved in building the local reservoir at Scarr. (won the Military Cross/ medal in WW1). Had several children Annie, John, William Mary, Kitty Joseph and Sydney.
Kate became housekeeper to Tommy Bailey railway signalman at Pateley Bridge a widower with one son. Frances stayed single. Ran the Crown Hotel in Pateley Bridge, then was a cook at a methodist college in Ilkley, before retiring to Pateley Bridge.
Fanny married Charles Jolly in Leeds, an engineer at Kirkstall Forge (originally from Ipswich in Suffolk. They had 3 daughters Betty who died in childhood (diabetic). Margaret who died in her early forties and Mary who lived in Horsforth all her life until moving into care aged 90 in Leeds.
James died in Pateley Bridge having suffered from asthma for many years.
Alice died suddenly in the kitchen of the crown hotel Pateley bridge visiting her daughter Frances.


JAINE PICKERSGILL. Born 14.4.1654 Ilton. Died 1657 Ilton. Dau of John & Ann Turner.
JANE ELIZA PICKERSGILL. Born C1823. of Bramley Grange, Grewelthorpe. Buried 3.5.1841 age 18.
JANE PICKERSGILL. Born C. 1847 Middleham. Dau of Charles the Horse breaker & Prudence.
JENNETT PICKERSGILL. Married Christopher Williamson. of Ellingstring at St. Mary’s Church Masham on 17.11.1612.
JOHN PICKERSGILL. Died June 1602 Ilton.
JOHN PICKERSGILL. Born C 1622 Ilton. Died March 1687 Ilton. Son of Richard & Alice. Married [1] Ann Turner. Masham 31.1.1646. Married [2] 2.10.1656 Jaine Wetherill. of Masham. Married [3] Joan Beckwith. of Masham. on 28.4.1667.
JOHN PICKERSGILL. Bap 24.8.1651 Masham. Died 1698 Ilton. Buried in Masham Churchyard. Son of John & Ann Turner. Married 12.12.1683 Ann Wrigglesworth. of Masham. He was a fellmonger.Dave Pickersgill has the following research which differs from above.
JOHN PICKERSGILL. Born 1651 Masham. Died 8.2.1695 Methley.Son of Robert & Margaret Saynier. Married Ann Wrigglesworth. [1655-1729] They had 5 children.
JOHN PICKERSGILL. Born 1688 Angram Cote. Died 29.8.1752 Ellingstring. Buried in East Witton churchyard. Son of John & Anne Wrigglesworth. Married 7.6.1732 Elizabeth Thompson. of East Witton.
JOHN PICKERSGILL. Fellmonger of Ripon hired an apprentice Chris Long. in April 1715. [Ref. UK. Register for apprentices & Indentures.]
JOHN PICKERSGILL. Buried 9.12.1704 Grewelthorpe. Married Sarah Beckwith. of Kirkby Malzeard in 1701. [see letter from Nicola Simpson above]. See will at bottom of this page.
JOHN PICKERSGILL. Bap 1704. Possibly Son of John & Sarah Beckwith.
JOHN PICKERSGILL. Bap. 31.5.1713 Kirkby Malzeard. Son of Thomas. [Ref.IGI].
JOHN PICKERSGILL. Had land at Low Moor, Nutwith side, Grewelthorpe. 2roods, 23 perch, mentioned in the Enclosure award 1782.
JOHN PICKERSGILL. Lived Graygrete Laverton. Married Isabel. Died 1774. Owned land in Grewelthorpe & Laverton. Father of Charles & Thomas.Will of John Pickersgill.I John Pickersgill of Graygrete in the township of Laverton Parish of Kirbymalzeard in the County of York Yeoman Being weak in body but of Sound and perfect memory Praised be Almighty God for the same do make and publish this my last Will and testament as follows First my will and great desire is that all my Just debts be fully paid and discharged and for that Intent I charge the Redemption of all my mortgaged Lands at Grewelthorp in the said Parish and Graygrete aforesaid with payment- thereof and likewise my personal Estate. And after the payment of my Just debts the remaining part of the produce of my Effects I give and bequeath to Isabel Pickersgill my Dearly beloved wife with full power to sell and dispose of all my Lands at Grewelthorpe and Graygrete aforesaid for the payment of my Debts as above mentioned and I desire Charles Pickersgill and Thomas Pickersgill my sons to aid and assist their mother in the Sale of my Lands and other things wherein they can be of Service to her and for their trouble and Expenses I order they shall be paid and all my goods Chattels and personal Estate after the payment of my Debts I give and bequeath to Isabel Pickersgill my said wife whom I appoint Sole Executrix of this my last will and testament revoking all former and other Wills In witness whereof I John Pickersgill have hereunto Set my hand and Seal this twenty fifth Day of January in the Year of our Lord One thousand Seven hundred Seventy twoSigned Sealed Published and declared by the said John Pickersgill for and as his last Will and testament in presence of us and Wittnessed by us in his presence and at his requestJohn Pickersgill [signs]Leonard Burrill [signs]Christopher Lofthouse [signs]John Spence [marks]. 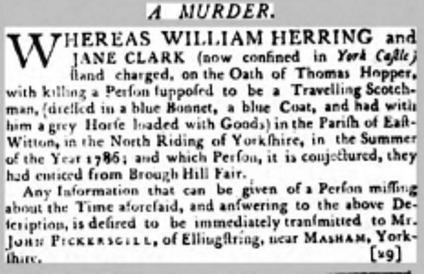 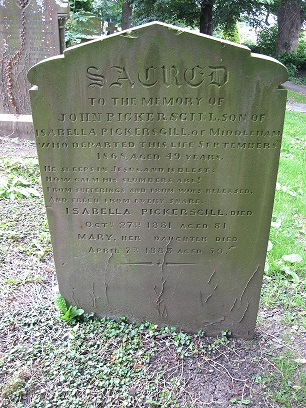 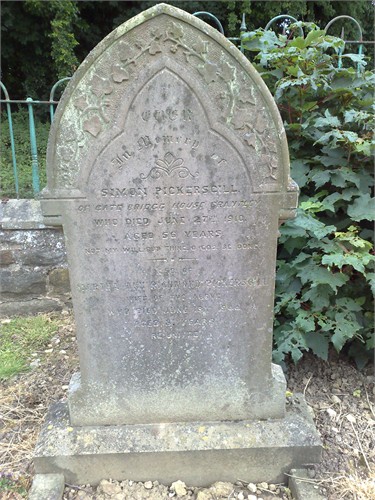 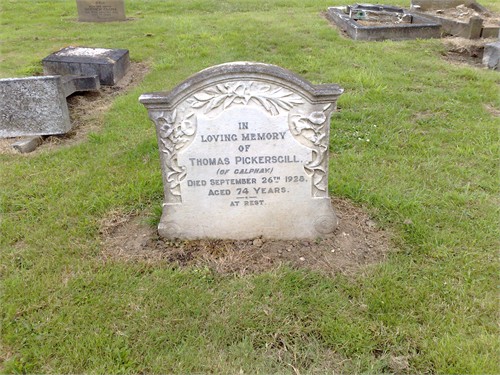 A rough precis of the Will of Charles Greeveson 1704/5 as transcribed by Carol Metcalfe.“I give and bequeath unto Charles Pickersgill & John Pickersgill sons of Sarah Pickersgill. of Grewelthorpe. £5 to be paid when they reach the Age of 21.I give & devise all my messuages & freehold lands, tenements & hereditaments situate lyeing & being within the territories of Grewelthorpe unto Charles P. & John P. & their heirs for ever equally to be divided betwixt them when they reach 21. And I give Charles P & John P all my leased lands when they reach 21 and not before. Sarah Pickersgill. their Mother shall have & enjoy all rents, issues & profits of all and singular as well of my freehold lands & leases during the minorities of Charles & John. Sarah shall have house roome in my dwelling house during her life if she be not again married. All my personal estate I give to Sarah and make Sarah my sole executrix.”