Historical information about the surname Harland. This is an Anglo-Saxon locational name with its origins in any of a number of minor places named from the Olde English pre 7th century “har”, meaning “grey”, or “hara” meaning “hare”, plus “land” for “land” or “patch of country”. Locational surnames were usually given to the lord of the manor, to the local residents and especially to those who left their original homes and went to live or work in another village or town. On July 28th 1555, Alicia, daughter of Thomae Harland, was christened at Howden, Yorkshire, and the marriage of Johanne Harland to George Mallerye, took place on August 11th 1560, at Filey, Yorkshire.© Copyright: Name Orgin Research www.surnamedb.com 1980 – 2010.


Letter from Ryan Harlan in USA [Nov 2019]. If anyone can help Ryan please contact the site.

Greetings!
My name is Ryan Harlan (the terminal d being dropped in the states in the late 1600’s). I have been looking in to the family Genealogy for some time, and have been at a standstill for some time. I was searching online and came across Grewelthorpe website which references Harland Family, in and around that area. Those of us in the States who bear the Harland surname, can trace ourselves back to one of three brothers, all of whom left the area of Sunderland/Newcastle/Durham, in the 1600’s. The bulk of our Genealogy was compiled by Alpheus Harlan in the late Victorian era. I am curious if any of the local Harland cousins might have information on the family tree which predates 1625. The first Harland mentioned in said Genealogy, which we have absolute knowledge of, is James Harland, born 1625 in Bishoprick, Durham. He is the Father of the three brothers who migrated, via Northern Ireland.
I am aware that finding anything concrete at this point in history can be tricky, as many documents did not survive events such as the Reformation, Civil War, etc. At this point, I have pieced together the family tree 5 generations past James Harland, but, I am in doubt that it is completely accurate. Any information on UK Genealogy, family in the area who may be knowledgeable, or websites of worth, would be deeply appreciated!
Second, but still pertaining to the first, my searching leads me to believe that a “Captain William James Harland”, may have served under Admiral William Penn. I have found a few references to various Harlands serving the Royalist cause, mostly in Cavalry or Dragoon Regiments. I have had very little luck in finding anything pertaining to Naval forces, or Officers on the side of Parliament. Even my request to the British Maritime Museum has turned up very little. If any sources for information would be known in regards to the English Civil War, and the Naval aspects of the Roundheads, I would deeply appreciate them as well.
I sincerely await your reply.
Warm regards,
Ryan A. Harlan

Letter sent to Dalesman magazine by Michael Booth in Australia. in Oct 2011.How I enjoyed the article on Hackfall. My association with Hackfall goes back through my mother, now deceased some forty years, a cousin of the Harland family who lived at Victoria House in Mickley, Ripon. She used to visit them from the early 1900s. I was born in 1939 and well remember bus trips to Mickley in the 1940s and 1950s and my favourite schoolboy expedition was always to explore Hackfall. The majority of the trees had been felled and the challenge was to get all the way through to the other end and walk to Grewelthorpe. The halfway point was Barrows field, a favourite blackberry picking spot in season.In my early visits, a tree in the corner leading to the second part of the woods still stood and on it were carved my mother’s and father’s initials and a love heart. They were married in 1917. Next stop was Fisher’s Hall, or just plain Fisherman’s Hut to me, and Mowbray Point was always extremely difficult to find, but well worth the climb. Mum always talked of other places she could remember as a young girl – grottoes and fountains and the like – but all seemed to have been re-claimed by the vegetation.The path through to Grewelthorpe was a real challenge but, in later years when I was old enough to imbibe, a welcoming pint in the Crown was the ultimate prize. But then there was always the return trip.Moving to Oz in 1974, I thought my days of visiting Hackfall were over but a holiday in1989 saw me back there for two visits with my wife of twenty-five years. We managed to find our way through to Fisher’s Hall on both occasions. It hadn’t changed.Hackfall holds such a special place in our family that my eldest sister, who passed away aged ninety last September in Townsville, requested that her ashes be scattered – where else but in Hackfall.Michael H Booth, Busselton, Western Australia.


Thanks to Margaret Pemberton for letter [Jan2014] re Esther Harland. I was interested in your genealogy site, where found the baptism details of my Great-great-great grandmother Esther Harland (5.5.1782). In 1807 she married Thomas Thorpe of Masham (whose parents were Anne Gregg and ‘Thomas of Grewlthorpe’. She died Masham 7.8.1853.> Esther and Thomas’s son, Joseph Thorpe was born Masham 6.111819 and died in Bradford 26.12.1875.> He married Margaret Brownrigg who was born on the Isle of Man. Their son, John Thorpe was born Bradford 1.5.1843 and his daughter, my grandmother, May Thorpe, was born 1.5.1883’ I’m sending this info just in case anyone else in the Harland family tree connects with it and is interested.
Though living in retirement in Whitstable, I was born in Bradford and so am still a Yorkshire girl..


If you can add any information to this page please contact the web site.

MARY HARLAND. Bap. 26.2.1792. Dau of Thomas.
MATTHEW HARLAND. Born C. 1802 Whitby. Husband of Elizabeth from Glasgow. Living in Azerley in 1851. Flax Dresser.
MAURICE HARLAND. Born 30.7.1930. Died Jan. 2018 in Bradford. Son of Edward of The Cottages, Grewelthorpe. Admitted to Grewelthorpe school on 29.4.1935. Left for Ripon Grammar school in 1941. See item “2 boys killed by bomb” in History section of this web site. Maurice was an apprentice joiner with George Thirkill & son in the 1940’s. He worked with Harold Hall. Letter from son Glenn Harland [Feb 2018]on Notices page.
RACHEL HARLAND. Born c 1768 Thornton Watlass. Living Kirkby Malzeard in 1851. She was the Aunt of George Thirkill. [b1841].
RICHARD HARLAND. Born C1831 Ripon. Married Annie C1910. Living Keighley in 1911.
ROBERT HARLAND. Lived Grewelthorpe. Died 28.1.18?? Patrick Brompton. Age 33. Husband of Agnes. See photo of grave at end.
SARAH ANN HARLAND. Born 26.3.1871. Dau of Thomas Harland of Azerley. Admitted to Grewelthorpe school on 7.5.1883 having previously been at Burneston school.
SAMUEL HARLAND Born C1825 Mickley. A widower in 1891.
STEPHEN HARLAND. Born 25.8.1965. Son of Gordon. Attended Grewelthorpe school.
THOMAS HARLAND. Born C1721. Buried 18.3.1811. Thomas was a basket maker. He left a will which had been made 25.6.1810. Proved 22.3.1811. He also owned land at Low Moor Grewelthorpe. Ref. Enclosure award 1782.
THOMAS HARLAND. Bap. 5.9.1776. Son of Thomas.The following report appeared in the York Herald April 24 1830.The Pauper Thomas Harland a well dressed respectable looking man stated that at Candlemas 1821 he hired as servant to his brother, a straw plait manufacturer at Grewelthorpe for 1 year. That he received 2/6 as a Gods penny, and his meat and clothes for 1 year, at the expiration of which he had a fresh agreement. On being cross examined the pauper said that in Oct 1822 he went into Scotland, but not because there was a charge of forgery against him, he had been in the 3d Lt Dragoons and left them by walking out of the barracks on the night of Aug 28 last. He was sure he had slept above 40 nights at Grewelthorpe. during the year 1821 altho he had 4 journeys to go on business. He addressd letters to his brother at Newton le Willows, altho he lived at Grewelthorpe, this he did at his brothers request because he went to Newton every Sat. night. Mr Alexander [prosecutor] said he would prove perjury on the part of Harland. He called the brother of the pauper & 2 females from whose testimony it appeared that Harland had during the year 1821, did not sleep 10 nights at Grewelthorpe, altho he swore that he had slept 46 nights. The court quashed the order. Harland was taken into custody on a charge of perjury, but we understand he was later liberated. 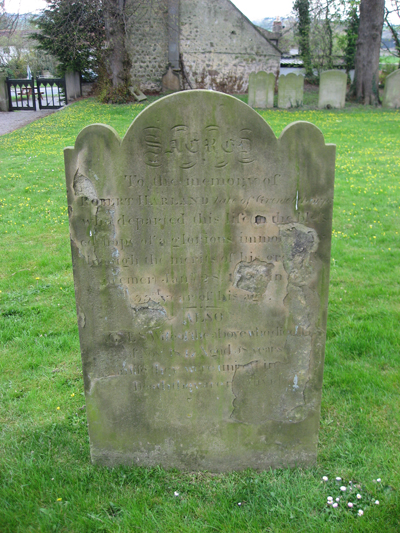