The Gill family name was found in Yorkshire after the battle of Hastings 1066.


Letter from Nickie Robinson [Feb 2021}
My Great, Great, Great Grandfather – Seth Hall Grassam (sometimes spelt Gresham) married a ‘Mary Salmon Gill’ she was born c.1859 and according to census records in 1901 was living in Cleveland Street, Doncaster, South Yorkshire. Seth was originally from Spalding and married Mary, in we think 1881. They went on the have 5 children – Nellie, Dennis Robinson, Thomas Edward, Phebe Annie Barley and Ella between 1882 and 1890.
I was trying to follow back the Gill line but can’t find anything.
She has an unusual middle name (or possibly prefix to the surname) have you seen her on your searches at all?
Any information would be appreciated and anything I find later would be happy to share.

If you can help Nickie please contact the site.

Letter from Phil Horey [January 2021] He is seeking information about Thomas Gill of New York Mills & Birchwood Summerbridge.
It is believed that Thomas committed suicide in C1900. Has anyone information or confirmation of this event.
Please contact the site if you can help.

Letter from Charlie Gill January 2019. If you can help please contact the site.
I’m trying to figure out if I’m Irish or Scottish. Last name is Gill. George Gill was born 7 December 1819 in Gifford England and died 23 Feb 1895 in Green Wisconsin. His son, Edwin Robert Gill was born January 22 1843, in Yorkshire, England and died 7 March 1876 in Maryville Missouri. I’m told he got on the boat coming to America in 1841 which is interesting given his year of birth. It would be the first of a kind if true. Edwin’s son was Gordon Granville Gill, 1869 – 1960. I was born in 1955, meaning I was five when he died. There is a picture of me with his wife, my great grandmother.
Sorry, that is all I have. Now, is my father’s side Irish, Scottish, or most properly, English.
Any help you could give would be greatly appreciated.
From Charlie Gill II

Letter from Martin Senecal May 2015. if you can help him please contact this site for his address.

Hello, my great grand father was Albert Edward Gill. His parents were from UK George Edward Gill married to Annie Still, I think they got married in Darlington but born in Leeds. I am Canadian. They came here around 1910. I thank you for help with the Battle.

Recorded in the Domesday book in 1086. Henry Gille moved the family to Cumberland in 1200 and the family gave its name to the village of Gilsland. was wondering where could I find who are George’s parents and so on.

Reply from Wendy Niven July 2016. with information for Martin Senecal.

Thanks to Elaine Utting for photos and information about the Gills of Hackfall house. Dec 2014.

Letter from Sylvia Gill October 2013.
My g.g.grandfather was William Gill, baptised 27 June 1830 Aldfield, illegitimate son of Isabella. From research at Northallerton, in the Ripon draft of baptisms and burials 1790-1812, I found Isabella baptised 1 Jan 1804, daughter of Matthew Gill of Sawley. Unfortunately, no mother was named.
Other children of Matthew Gill of Sawley, with baptism dates, are:
George 30 March 1800
Hannah 21 February 1802
Margaret 5 October 1805 (daughter of Matthias)
Ann 3 May 1807
Ellen 12 February 1809
James 22 April 1810
Other researchers have Lydia Grange as the wife of Matthew but I have found no evidence for this. Nor have I found a link between my Matthew and the Matthew Gill who married Margaret Beckwith in 1776 and Ann Othick in 1788 but I think it highly likely they are the same family, perhaps father and son. I look forward to further discoveries.

The following information is taken from Parish records, From School and Census records. Parish Council records and memorial inscriptions found in the churchyard.
If you find any of this information helpful in your genealogical research I would love to hear from you. Also if you have any further information to add to the article please email me. 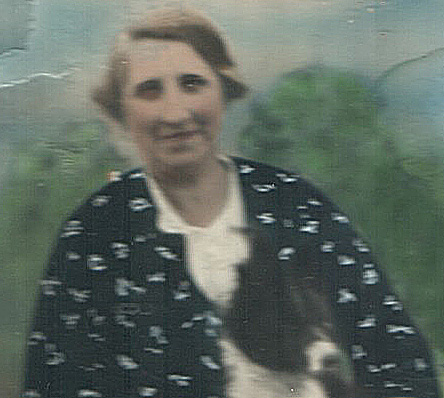 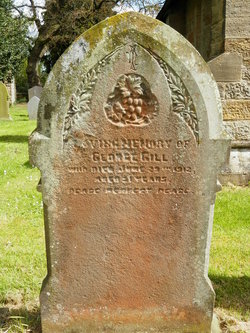 Report in Leeds Intelligencer in September 1777. 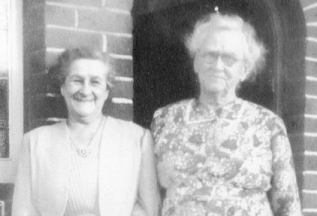 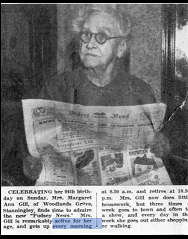 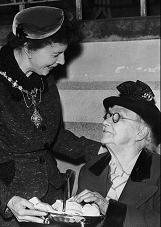 Margaret Ann Gill age 94. and taking tea with the Mayor. 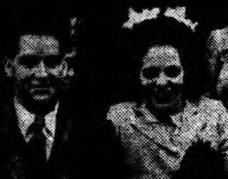 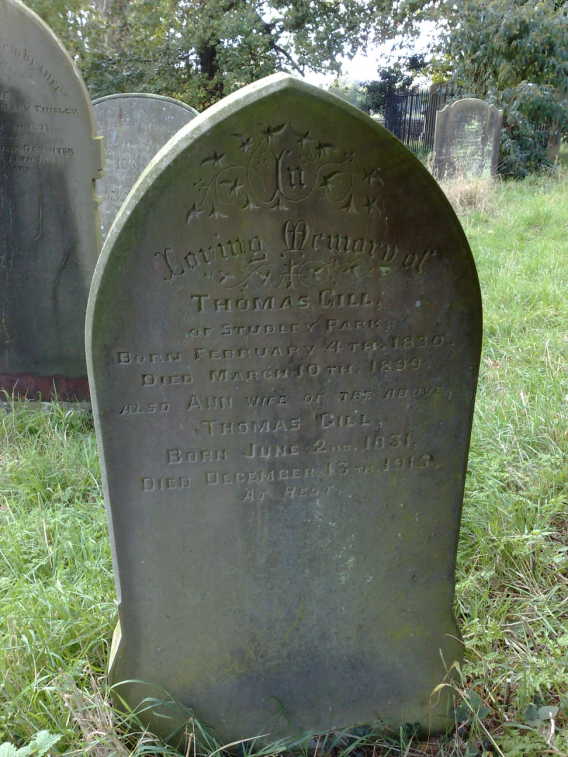 Grave of Thomas & Ann at Aldfield.

OBITUARY For James Gill. 1876-1937.
As reported in Ripon Gazette Jan or Feb. 1937.
The death has occurred of an old inhabitant of Kirkby Malzeard. James Gill. of Church Street age 61years. He was a well known character in the district being village post master for 23 years and then covering an outside round to Dallowgill for 12 years. He retired 2 years ago [1935] .
Noted for a ready wit and good humour. In boyhood he joined Kirkby Malzeard sword dancers and 2 of his sons have followed in his footsteps. He was a good cricketer and a splendid quoits player. He served in HM Forces in the Great War. He was born in Laverton. His wife died 10 years ago. He leaves 4 sons and 4 daughters.
Chief Mourners.
Mr John Gill [brother].
Mrs J.Metcalfe [daughter].
Mrs G. Blades [daughter].
Mrs. A. Baines [daughter.]
Mrs N. Carling.[daughter.]
F. Gill: D.Gill: H.Gill: & A.Gill [sons]. 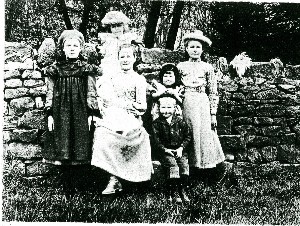 
NEW YORK MILLS SUMMERBRIDGE.
The settlement originated as terraces of weavers’ houses around a flax mill built by William Hebden in about 1814 on agricultural land by the River Nidd. In 1834 the mill was acquired by Francis Thorpe of Knaresborough, who renamed it New York Mill. By 1834 Thorpe was employing 150 people at the mill. In the 1870s the export of yarn declined, and the business failed in 1883. In 1889 the Gill family bought the mill, rebuilt it and replaced the old water wheels with a water turbine. In 1891 they installed a second turbine to provide the first electric light in Nidderdale. The Gills started to spin yarns of hemp for the production of twine. They modernised the mill in the 1930s, and in the 1960s started to spin artificial fibres for carpets. The Gill family sold the mill in 1968, and the new owners closed it in 1980. The property has now been converted into a small industrial estate. 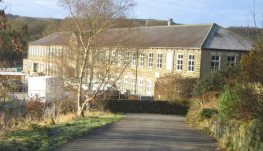 My name is Chrisie Gill and I live in the US. Currently I am contacting as many people aspossible regarding the Gill Ancestry.com Genealogy project.
I wish to bring to the attention of Gill families and others the information in the paragraph below to help inform
them about the project.
We are encouraging any and all men of the surname Gill, McGill, Gilliam etc. to participate in the Ancestry.com DNA genealogy project.
This cheek swab Paternal DNA test will help link Paternal famly lines across the miles. We especially encourage those Gills that may have
the trait of having a white streak(s) in their hair since birth or teen years (often occurring on the right front quarter of the head), as well as the trait of a cowlick.
I do not have any connection to Ancestry.com other than I am a member who happens to have gotten my family to complete the test and havealready linked very closely with another family because of it. We are trying to trace our families oversees and so far no luck.
With the DNA testing, it may just give us a link to trace our families from the opposite end, since we are at a brick wall as far as their immigration to the U.S.
Thank you for your time,
Chrisie Gill
Florida, USA.