Obituary of Robert Clarkson. as it appeared in the Grewelthorpe Parish magazine March 1931.

Friday January 30th 1931. The death of Robert Clarkson. just after completing his 85th year. [born 1846]. Grewelthorpe has lost one of its most respected Parishioners whom all will mourn.
Born in Ellingstring he never wandered far afield, and finally settled 55 years ago at Grewelthorpe, shortly afterwards moving into the home which he now has quitted only at death.
His late wife and he being childless, adopted the present Mr.J.Clarkson of Camp Farm in 1883 at the age of 3weeks. They tenderley cared for him as a son and the most affectionate relations have always existed between foster Father & adopted son, who took the name of Clarkson. Both he and his wife were with him when he passed away, mercifully, in his sleep.
By profession Robert Clarkson. was a woodman, well versed in forestry, but was an adept at all estate work such as planting, fencing etc. His work was thorough and beautifully neat. He was most conscientious [no “ca’ canny” about him] he even grudged minor interruptions by his employer asking his opinion on some other matter not immediately connected with the work in hand.
Some 50 years ago he was taken into the service of the late Bishop Gott, who as vicar of Leeds had bought the estate of “The Hutts”, which he further beautified by planting all present timber [except the old Beech Wood] so that Clarkson may be said to have been in at the birth of all The Hutts plantations, which he took a Fatherly interest and loved.
On Bishop Gott’s death about 1907 the property was purchased by the present owner who had known it in his youth when it was mostly whins and arable land. The writer takes liberty of quoting from a letter he has received from Mrs Frank Gott. of Leeds:
“I do not think there are many of us of whom it could be said as truly as of him, “well done thou faithful servant” he always put the interest of those he worked for before his own, and had the happy gift of making his work his chief happiness in life. he was at The Hutts when I first went over when engaged to be married, and I associate many happy hours spent with him, showing my husband what he had done in the woods since our previous visit.”
He was a Churchman and a God fearing man, and the trusted friend of his employer, leading a simple honourable life, never known to say ill-natured word about anyone. He might with all reverence be described as “a man without guile” and “One of nature’s noblemen.” Surely his straight forward hard working, simple, temperate life has now got its reward.

Robert was buried at Grewelthorpe on Feb. 2nd 1931. 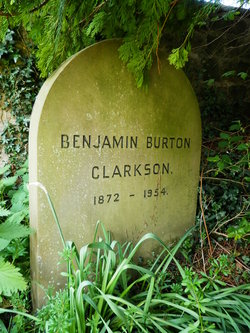 If you can add any more information to this page please contact the site via the page at the start of the Genealogy section.