Frederick Thomas Kruckenberg was the vicar of Grewelthorpe from 1882 to 1889.

Kruckenberg is a German locational surname, which originally meant a person from the village of Kruckenberg, just east of Regensburg, Germany. 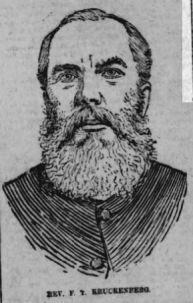 
He was born in Islington, London in 1846. Son of Frederick Kruckenberg [see photo below] & Mary Harriet Marshall. of Bristol. He died in 1928 and his wife died 1927. they are both buried in St.James’s Churchyard Grewelthorpe.

Frederick Kruckenberg [senior] his sister. Either Louisa or Catherine. Can anyone help identify this lady.


In 1841 in Islington Frederick [senior] age 22 is recorded as the son of Francis[John Frederick] & Catherine. His siblings are Catherine [19] & Louisa aged 15+, George age 14 and Alfred aged 5. Also Sarah Charlton age 75.
{Is this a clue as to why Frederick Lawrence Kruckenberg changed his name to Charlton 80 years later.}


In 1851 aged 5 yrs, Frederick Thomas was living with his Great Uncle Henry Marshall who was a Professor of Dancing in Clifton, Bristol. Henry’s wife Sarah was a mistress of a ladies school and they had 4 young ladies living with them. Also in the house were Frederick’s Aunts, Sarah, Josephine and Louisa, daughters of Henry & Sarah.


Frederick Thomas received his training At Kings College London. He graduated in 1864. Ordained deacon in 1868. and Priest in 1869 by the Bishop of Winchester. His 1st curacy was in Peckham. then Greenwich 1870 to 1874. In 1871 Frederick was lodging with Alice & Thomas May in Lewisham, Kent.

In 1881 he had moved to Masham, Yorkshire, where he was the curate at St.Mary’s Church. He was unmarried, aged 35 and living with his maiden Aunts Sarah & Josephine Marshall in College Lane, Masham. 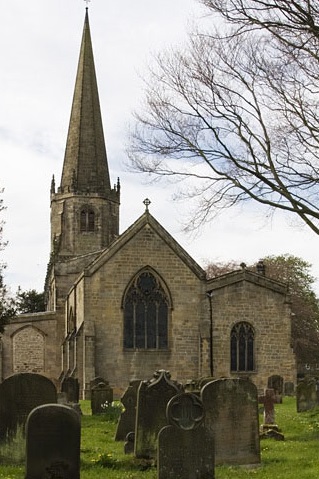 In 1882 he moved to Grewelthorpe as vicar of St.James’s Church.

He married Mary Sophia Robson who had been born in Bombay, India. C 1859. She was the daughter of James & Annie Robson. {please see letter from D.West at end who has a different Mother for Mary Sophia}. James had been born in Headingley.
Their children were:-
James Kruckenberg born 25.7.1884.Grewelthorpe. died 3.8.1942 in Ripon. He followed his Father into the church. In 1911 he was a clerk in holy orders boarding with Wm Kirton in Northumberland. He married Annie Eva Hannah Maughan. in 1914. They had a dau. Eva Nancy Kruckenberg born 1916 in Bedale.and son Thomas Anthony Michael Kruckenberg. born 1919 in Knaresborough. Died 1999 Australia. They both went to Australia. See Stella Short letter at end. Also J.Dillon letter re Dorothy. When James died he was the vicar of Studley, Ripon. He left £4772 in his will. His widow went to Australia and died there in 1960. 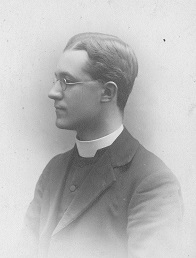 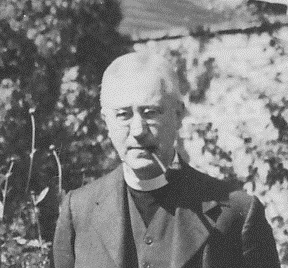 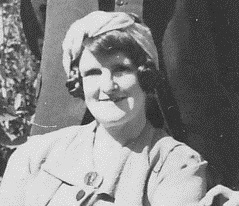 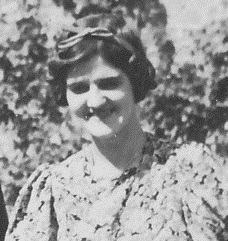 Eva Nancy Kruckenberg. Known as Nancy. born 1916. died 1979. In 1939 Nancy was a member of the Ripon Drama Society. [see letter re. her death from Charles Hocart at end] 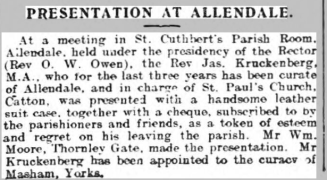 In 1901 the family were all together again living in the vicarage for St. Bartholomew’s at 195 Hew Cross Rd Bradford. 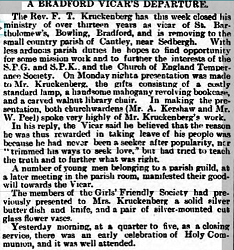 In 1911 the family had moved to the vicarage at The Larches, Ilkley.

Their daughter Louisa Kruckenberg did not marry she stayed caring for her Father. She was a very talented photographer with an interest in Farming life and the countryside. Her photographs can be seen in the County Library and also Harrogate and Boroughbridge Libraries.

Thanks to Elizabeth Hauke for these 2 postcard images. 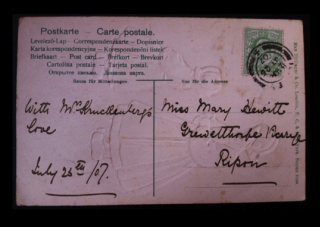 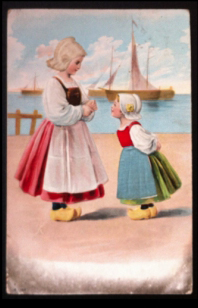 Postcard sent by Mrs Kruckenberg to Mary Hewitt a child of the Vicar of Grewelthorpe.
Posted 25th July 1907. 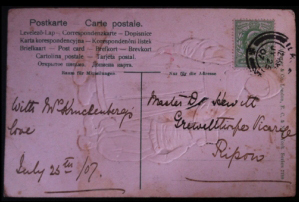 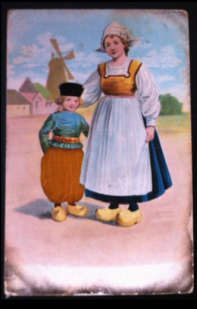 Another postcard for Master D Hewitt from Mrs Kruckenberg. 1907.

A letter from Stella Short in Australia. Feb 2015,

Dear Barbara,
I found your article on the Kruckenberg family extremely interesting.
Eva and Thomas were my cousins, their mother Annie was my father’ s sister.
Annie, Eva and Thomas arrived in Western Australia on 3 August 1948 aboard the ‘Orion’ and settled in the country town of Harvey approximately 140 kilometres south of Perth
I knew there was a connection with the Robson family as a member of that family also lived in Harvey
but I never knew just how to make the connection.

Sadly they have all passed away. Thomas or Tony as he was known, often read the lessons in the local church and it was often mentioned how he gave full meaning to the reading.
His passion was photography which was a family trait. He died in 1999 aged 80 years
Neither he nor his sister ever married.
Regards
Stella.

Thanks to Stella for photos of the Kruckenberg family.

Letter from Jonathan Dillon July 2015.
I did indeed find your research interesting. Although I originate from the Potteries, I now live in Bradford. I was doing some amateur investigations into the now demolished model village of Ripleyville in south Bradford (in particular the church of St Bartholomew). A very nice chap called Bob Walker has been researching for several years and has his own website on Rediscovering Ripleyville’.

I found, as you reveal, that Frederick T Kruckenberg and his wife had four children: James, Louisa, Francis and Frederick L Kruckenberg. The parish records reveal that in 1891 they baptised another child, named Dorothy, who clearly died in infancy.

I thought you might find that interesting, if you weren’t already aware.

Letter from Charles Hocart August 2015.
The date you have for Nancy’ death is not correct. I have clear recollections of her in the 60s and 70s. She died before Tony who then lived by himself in their house in Roy St. but unfortunately I can’t be any more precise.

He was a very nice and gentle man which rather belied his service as a Paratrooper during the war.

Thanks to Sara Eade for contacting us December 2015.
I found your research very interesting. I am interested in Frederick
Lawrence Kruckenberg born 1889 – wondered if you knew any more about him
and why he changed his surname to Charlton in 1922?

He married Ethel Dorothy Eddison in the Summer of 1922. They didn’t have any children.
Frederick trained to be an architect.

Sara sent the following item from the London Gazette.
FREDERICK LAWRENCE CHARLTON, of 63 Woodhouse-lane in the city of Leeds, Architect, heretofore
called and known by the name of Frederick Lawrence Kruckenberg, hereby gives notice, that, on the
nineteenth day of October 1921, he renounced and abandoned the use of the said surname of
Kruckenberg and assumed in lieu thereof the surname of Charlton, and further that such change of
name is evidenced by a deed poll, dated the nineteenth day of October 1921, duly executed by him
and attested and enrolled in the Enrolment Department of the Central Office of the Royal Courts of
Justice, on the 20th day of October 1921 Beaumont and Son,
21 Bond-street, Leeds, Solicitors for the above named Frederick Lawrence Charlton. 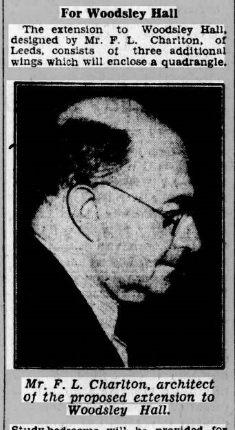 Letter from Peter Knowles in January 2016.
When I was young I lived opposite St Bartholomew’s Church, Ripley Ville. Though I was not an Anglican the vicar, Dr Heinz Arnold, gladly gave me permission to practice the organ in his church. In recent years I have been doing a bit of research on St Bartholomew’s but hit a problem with identifying the third incumbent. FindMyPast. com listed him both in the 1891 and 1901 census returns as Rev Frederick Thomas Knickenberg of whom I could find no trace in Crockford’s Clerical Directory. Now all (including FindMyPast’s mistransliteration) is revealed and I can complete a list of incumbents. From your site I feel that I already know Rev Frederick Kruckenberg very well even before I consult Crockford.

Frederick clearly loved his adopted county. I feel quite envious that he was able to live in Ilkley, where many of my family members lived.

The address of the Vicarage was 195 (or sometimes 193) New Cross Street from about 1900. When built (1875) the vicarage was only served by unmade tracks and it appears variously under ‘New Hay Lane’ , ‘New Hay Road’ and ‘Bowling Park Drive’.

Letter from Denielle West. March 2017.
I read with interest the information you provided on the Kruckenberg family on your website. It is most informative as I am currently researching the Robson family. Mary Sophia Robson married Frederick Kruckenberg. One little possible error is that you give Mary’s mother as Annie Robson. Annie was, in fact, her sister – if I’ve done my research properly!! I have her parents as James R Robson and Elizabeth McKenzie Robson

Thanks for all the information on Kruckenburgs on the website which I found very helpful.
I had been researching Frederick Kruckenburg (1819-1897) who was the father of Frederick Thomas Kruckenburg (vicar of Grewelthorpe).
He is not a relation of mine but his photo and a photo of his sister [see top of page] were amongst some old family photos handed down the generations and I was unsure where he fitted in as a friend of my family in the 1800s. I managed to trace this generation of the Kruckenburgs to Headingley in Leeds where they seem to have moved after leaving London. One branch of my family tree was also in Headingley at the same time, so I was able to tie up where the friendship probably started. However, I hadn’t managed to find any information about Frederick’s wife or child (F.T.K), so it was lovely to discover your website which has filled in many gaps.
Robert Scott
Lincolnshire, UK.