Seeking information about William Taylor from Grewelthorpe. His gravestone (which stands in St George’s Fields, Leeds) reads: “To the memory of William Taylor, Born at Grewelthorpe, Died at Leeds, May 24th 1873, in his 80th year.”

Either his father or a brother, we believe, was named Matthew. We think his mother’s given name was either Sarah or Elizabeth, but that’s not confirmed. He was a joiner by trade.

We’re seeking any information, facts, hints, suggestions, about his family and antecedents from Grewelthorpe. We’d also be happy to share what we know of his descendents, should anyone have an interest.
Thank you.

Hi Kurt,
I have found the following entries in my records for Taylors living in Grewelthorpe.
Elizabeth Taylor. Bap. 6.1.1762. Dau of Matthew of Grewelthorpe. [These baptisms would be at Kirkby Malzeard as Grewelthorpe did not have a church then].

After this I can not find any records for Taylors altho I do have a gap in my records from 1792 to 1850.

I hope this is helpful and I will keep on looking. I have found your photos of the grave on ancestry.co.uk.

From Kurt 14.6.2011. Hi, Barbara.
Thank you so much for your amazingly rapid response. These are certainly tantalizing leads to pursue. William and his wife Hannah had 5 children. They were named Elizabeth, Sarah, William, Matthew, and Catherine! Not uncommon names, by any means, but to have these same 5 given names turn up in the records you found is intriguing, to say the least. It would seem likely that “my” William is somehow connected to the lineage you found. The tricky bit will be figuring how and then confirming it.

A brief side note on William and Hannah’s gravestone: Their son Matthew was a professional sculptor. It is probable that Matthew carved his parents’ monument, although I have yet to absolutely confirm that. In 1880, Matthew was invited to exhibit at the Spring Exhibition of the Yorkshire Fine Arts Society. One of the pieces he chose to display was a bust entitled “Portrait of the Artist’s Father.” Oh, to find a copy or a photo of that! Yet another quest! It’s what I love about genealogy.


Kurt wrote again July 2017.
I found another very tiny clue to the history of the Taylor family in Grewelthorpe in the digitized and transcribed burial records from Leeds General Cemetery that are online at the Leeds University Library Special Collections website. The record for William Taylor (who was born at Grewelthorpe) lists his parents as Matthew and Elizabeth Taylor and Matthew’s occupation as farmer. The informant who supplied the information was William’s son, also called Matthew. 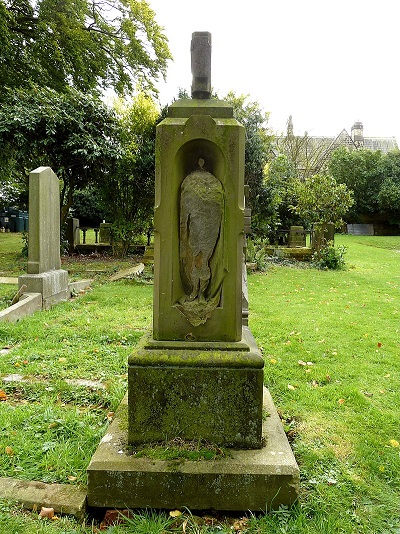 The grave of Matthew Taylor.
Thanks to Linda OCarroll for this photo. 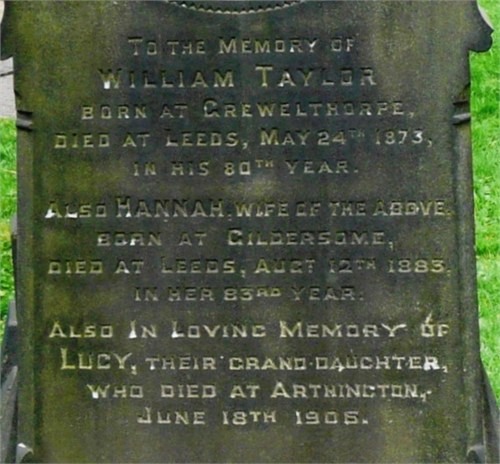 Inscription on the grave of William Taylor to be found in Leeds.


Added 2 June 2019. by B.Bradley.
Letter found in Leeds Mercury June 1905. from Rev. W.T.Adey. of Devon.
“I write to direct the attention of brothers of the rod to a beautiful and interesting memorial which I find upon enquiry has been strangely overlooked and perhaps never discovered by the fraternity.
It is the tomb of that of an ancient angler old William Taylor of Grewelthorpe. Situated on the right hand side of the chapel at Woodhouse cemetery ….. The monumental slab at the head of the grave is thicker than usual so as to give a good appearance when viewed edgeways. As if resting for a moment on the apex is a kingfisher, beautifully posed with a minnow in its mouth. In the upper part of the stone above the inscription are three trout placed in a triangle as an ecclesiastical symbol of the Trinity. Beneath and occupying a large part of the face is a sunk medallion with a representation of a stream, with Grewelthorpe village on the further bank. and with the old man in the foreground playing a trout, whilst the son who is the gifted sculptor of the tomb is receiving it in the landing net. The figures are portraits and are in fine preservation. On the plinth of the tomb as if left there once and for all is a wonderful facsimile in actual size altho in stone of the fish basket with strap and buckle. Finally, at the shoulders of the stone are beautifully represented in medallions and in natural size a water ousel and a kingfisher one on either side.
He goes on to describe the inscription shown in the photo above.

Updated Nov. 2021.
If anyone can add to this information please contact the site.