Thanks to David Sawyer for information about Boltons in West Tanfield. [March 2019]

Many branches of the Bolton family would appear to originate in the Parish of West Tanfield. The earliest Tanfield records relate to the children of Benjamin Boulton who was buried 1723 Tanfield. His children include William b 1685, Benjamin b 1687, Elizabeth b 1690, John b 1695 and George b 1698.

Of interest is the presence of Bolton records in the neighbouring Parish of Wath and Kirklington. I would suggest that the Christopher Bolton mentioned in the Rolls patent was buried Kirklington Jan 1579. The only child of Christopher recorded is George born appx 1558, died and buried Wath 1633. George’s children Christopher b 1580, Henry b 1583, Anna b 1586 and Elinor b 1588 were all Baptized in Wath. Henry b 1583 had two sons who had children Baptized in Wath, Henry b 1624 and Peter b 1634. Henry’s children were all born at Hewick Bridge and Baptized in Ripon. Peter has one registered son Christopher b 1663. After that there are no more Wath baptisms for members of the Bolton family. The only potential connections I can see between the records in the two parishes are that Henry 1624 was buried in West Tanfield 1683. Whether that represents a drift into the Parish of Tanfield is debatable. The recurrence of George as a Christian name would suggest a connection.
If you would like to contact David please contact the site first.


Letter from Elaine Gifford in June 2013.

I enjoyed finding your Grewelthorpe website yesterday when I searched for Thomas Ambler Bolton, of whom there are two that I know of ‘ the first was born in about 1816, son of Thomas Bolton of West Tanfield, and died aged 52 on 15 Dec 1868 in Basford NTT where he was Vicar. I don’t know how these two fit in with my known Bolton forebears, but the naming of a second Thomas Ambler Bolton suggests there is a connection somewhere.
The other Thomas Ambler Bolton was the brother of my great-grandfather, born in the June quarter of 1858, son of another Thomas Bolton, the one you have correctly listed as marrying Elizabeth Gatenby.
I was born Elaine Bolton and from my Bolton research would like to affirm most of the entries you have for ‘my’ Boltons.

I shall add a little information and make one correction.

Gatenby and Florence then sailed to South Australia where the first of their four children was born in Adelaide on 14 July 1883.

Your entry for ‘Robert Gatenby Bolton’ should be Gatenby Robert Bolton, who was visiting England in 1911 with his wife and daughter.

If anyone is interested, I can tell of their life in Adelaide, Broken Hill and Tailem Bend, and their numerous descendants.

I hope this information is helpful to you or to others with whom you have contact. 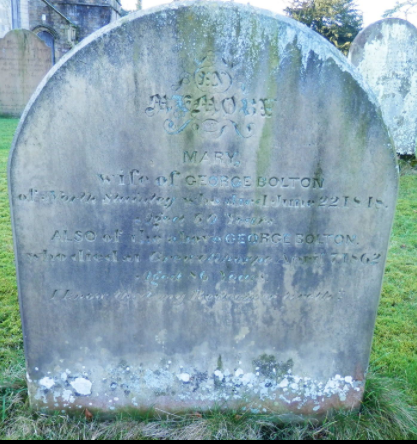 Message from Dennis Bolton June 2012.
My family originated in West Tanfield. I have a great deal of information on the Bolton family from the West Tanfield area, my problem is working out the relationships between the different individuals. At the moment, the only ones I can be positive about are,
&gt, 1 william and Dinah
&gt, 2 their daughter ann , born about 1819
&gt, 3 her son james who moved to leeds about 1880
&gt, 4 his son Charles william, my grandfather, born 1888
&gt, 5 his son denis charles, my father
&gt, 6 his son denis william, myself
&gt, I am sure there will be connections with your Bolton names, also some of the other names that I recognise, I congratulate you on the website and appreciate the information,thank you.Denis Bolton
&gt,