Maren Sims in New Zealand sent the following request in January 2012.My name is Maren Sims (nee Coldbeck) my father was Leon Edward James Coldbeck born in New Zealand in 1913, his father was Issac James Coldbeck. I do not as yet have his date of birth.I am just starting on our family tree and came across your wonderful website with lots of Coldbeck information.Does anyone know of any Coldbeck’s going to New Zealand in the late 1800’s?Our daughter now lives in England in Cheadle and as we will be visiting her later this year thought that this area would be included in our visit.If you can help Maren please contact the site.


Thanks to John Coldbeck for additional information.


Karina Grindale has been researching the Grindale/Grundill family for some time. They are related to the Coldbeck family thro’ the marriage of Ralph Coldbeck & Ann Grindale in 1772. In Ralph’s will dated 1808 he mentions an Elizabeth Coldbeck and John Beck who reside in Masham in a house leased by Ralph Coldbeck. Karina needs help with these 2 people, who are they, why are they residing in the same house. Any help would be appreciated.To contact Karina


Thanks to Edwin Rooks for information about William Robinson Coldbeck. 1869-1950. and other members of the family.


Thanks to Martin Harrison for information about Alfred Burton Coldbeck b.1867. and his family.


Comment sent by Larry Dunn: According to information on Coldbeck history on http://www.grewelthorpe.org.uk/Family-History/coldbeck-family it seems Ralph Coldbeck married Ann Ingleby at Ripon on 24 Nov, 1767 and their daughter Elizabeth was “Baptized . 4.1.1769 Littlethorpe (Ripon) Dau of Ralph & Ann Ingleby. Married Dec. 1789 Masham to George Gumdill.
Later living with John Beckwith. of Masham.” I assume that Ann (Ingleby) died leaving Ralph a widower. He remarries Ann (Grindale) Dawson a widow at Swinton on 25 Aug, 1780.
Ann Grindale married Thomas Dawson at Masham on 27 Jan 1772 and her first two children were Jane (1772) and Mary (1775) born in Ripon. I don’t have the date of Thomas Dawson’s death. So the remaining five children of Ralph Coldbeck were with Ann (Grindale) which exlains the 12 year gap between Elizabeth (Ingleby) Coldbeck and John Coldbeck Bap. 27th Feb. 1781 at Swinton.Mary (Dawson) Coldbeck aged 26 married on Nov 12th 1803 John Ingleby ploughmaker aged 24 at Masham. (Parish Records) According to the Grewelthorpe.org Ingleby family history, “John Ingleby born C.1781. Carpenter & Plough maker, lived Ilton cum Pott, married Mary. b.1781.
Mary died in Pateley Bridge”. These ages are incorrect as John would have been born c 1779 if he was 24 at his marriage in 1803 and his wife Mary would have been born in 1777 if she were 26 at the time of her marriage. So Mary (Dawson) Coldbeck was unrelated by blood to her elder sister Elizabeth (Ingleby) both having different parents.I am trying to establish a connection between John Ingleby of Kirkby Malzeard and Masham to the Ingleby line at Pateley Bridge. I don’t know if Ann Ingleby of Littlethorpe (Ripon), Ralph Coldbeck’s first wife, is related to the Ingleby line at Pateley Bridge. I also don’t see a connection between Mary (Coldbeck) Ingleby and Pateley Bridge, so why would she die there. According to the 1851 census:Living Dwelling 29, Ilton Cum Pott, Bedale District, Healey St. Paul parish, , Yorkshire, EnglandJohn Ingleby, male, head, age 76, born 1777 Kirkby Malzeard, occ.- ploughmaker.
Mary Ingleby, female, wife, age 76, born 1775 Ripon. Thomas Ingleby, male, brother, age 76, born 1775 Kirkby Malzeard, occ- pauper (formerly fellmonger).
Ann Ingleby, female, g-daughter, age 13, born 1838 Kirkby Malzeard, scholar.
According to the death register John Ingleby died iin 1857 Bedale, Yorkshire- North Riding at approximately 78 years of age if he was really born in 1779 for the 1851 census. I have no date for Mary Ingleby’s death. If anyone knows of a connection between John Ingleby of Kirkby Malzeard and the Ingleby line at Pateley Bridge I would appreciate finding out. There is a Beckwith connection to the Ingleby’s of Pateley Bridge as Thomas Ingleby married Jane Beckwith in 1779 at Kirkby Malzeard. The Beckwith family is from around Grewelthorpe remember. They had two sons named John, one born 1780 and dying 1783 and another born 1783 with no known death date. Could it be the John Ingleby of Kirkby Malzeard born around 1780 is the same John Ingleby born in 1783 at Pateley Bridge?


If you can help Larry please contact this site.


Thanks for Letter from Lesley Wood on 1st June 2014. Just had a brilliant read of the Coldbecks – I will contact you again. I am the daughter of William Jackson Coldbeck DFM and remember visiting my Grandad’s stepmother in Grewelthorpe [Lillie] known by my dad as Auntie Lillie as she was in a second marriage and too young to be called Grandma!!! I met or knew a number of people mentioned – Somewhere I have a little history with a photo at a farm with one person named as granny Thackrey – will try and find it. The site brought back loads of memories – it was always said that Robert Coldbeck painter used to decorate at Swinton Castle we may find out if it is true ( Robert father of my grandad). Unfortunately our immediate family Coldbeck name will die out as my dad and his brother although they had a son each, one has no children and the other had a daughter. I am Lesley Anne (Coldbeck) now Wood b,25.2.1945 Brother David John Coldbeck b.1.10.1946 Sister Janice May Coldbeck now McCormick b 12.1.1953 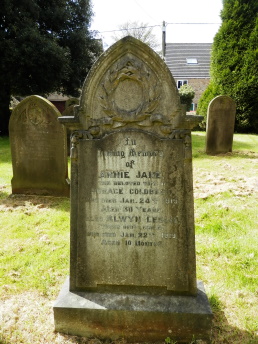 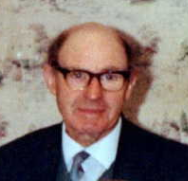 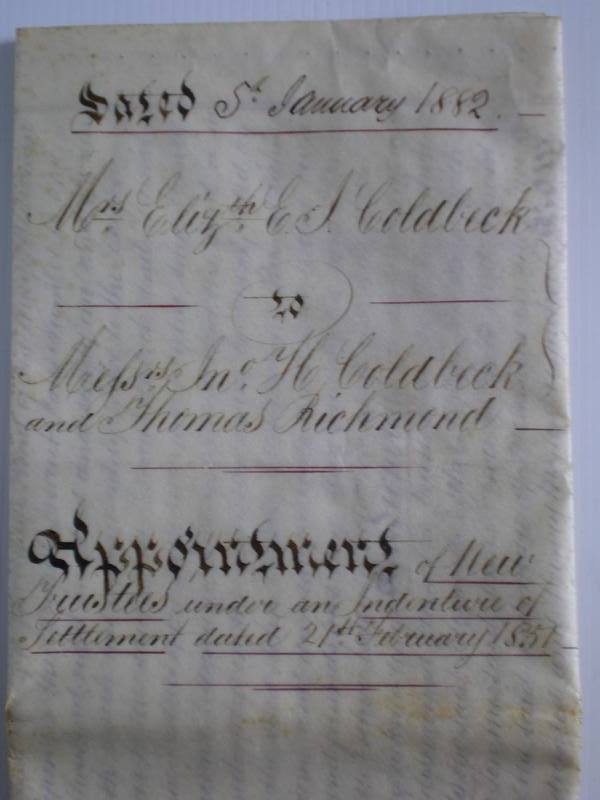 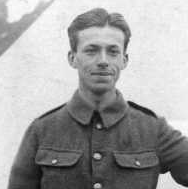 George Alfred Coldbeck. Killed on the Somme in WW1.


WILL OF RALPH COLDBECK 1744-1809. Ralph died in 1809 leaving “Goods & Chattels and Credits” not exceeding £450. He made his will in 1808 when he was 64 years old.He left his wife Ann a financial legacy of 3guineas a year plus the interest on a lump sum of £60 for life. Also the rent from the letting of a house which Ralph owned in Masham, this rent to be paid to her half yearly, the executor was Ralph his 3rd son. and he must make good any deficiency in the amount. He also stipulates that she is allowed to stay in a room in the family house rent and tax free, but if his son William, who was to inherit the house, feels that they cannot live together, the executor is to find her a small decent house to live in and he to pay the rent for her, and all taxes, so that she may live rent free.He also left his wife “A bedstead, bed with hangings, blankets, sheets & pillows and quilt and all belongings to it, and to take the choice of my beds, except the best bed.” Also 2 chairs, a tea table and other necessary furniture as she may think fit for her 1 room. She is to be found 1 bushel of good wheat once a month, and also 3 horse cart load of coals from the North or County Durham every year. These to be brought to her “free of all expense.” A memo to the will instructs the executor to give Ann 3 more chairs, 1 of them the easy armed chair that she sits in.The will goes on to leave legacies of money and or property to his other children [except John who is not mentioned at all]. The amounts vary between £40 and £80. “£30 is left to Frances Coldbeck natural daughter of my daughter Ann Hill. – to be paid to her when she arrives at the age of 21years, and the interest to be applied for her learning at school to read, write knit and sew.” Frances was 3 years old at this time.Ralph’s eldest daughter, Elizabeth, had married George Gumdill a grocer in Masham, and they had 5 children. At the time that the will was written when the youngest child was 7yrs old. Elizabeth was living with John Beckwith. in a house in Masham which was owned by her Father. This is the house whose rent Ann is to receive after his death. The 5 children are named in the will and left £5 each. All other pecuniary legacies are to be paid 12 months after Ralph’s death except “I give to my son-in-law George Gumdill one shilling to be paid to him immediately after my decease.“This report is taken from an item in “The Ripon Historian Vol.4. No2. April 1999”. Thanks to S.Coldbeck from Surrey.Thanks to Edwin Rooks for submitting it here. 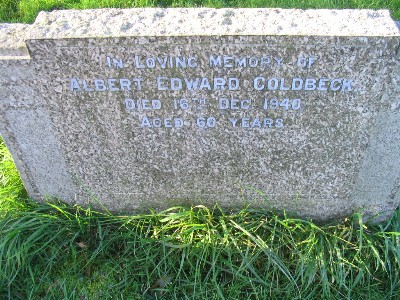 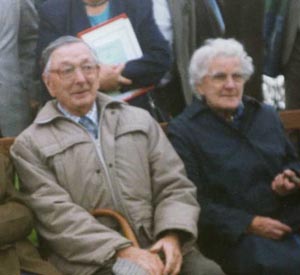