Details of Gargrave family from the Grewelthorpe area. Last update Sept 2021.
The following research was submitted by Suzi Nottingham in October 2012.
William Gargrave born around 1793 in Leyburn married Dorothy Wickill from Spennithorne on 12th February 1833, they had a daughter Ann baptised on 25 October 1833 At Mickley, buried on 4 November 1834. Dorothy was buried on the 7th April 1846.
By the 1851 census William is living in Kirkby Malzeard, described as a widower and farmer of 20 acres. With him is Elizabeth Weighill servant, 31 and two children Mary Weighill 3, and William Weighill
1.Parish records of Grewelthorpe July 1849 describe William as the illegitimate son of Elizabeth Weighill, spinster – presumably Mary is also illegitimate.
On the 10th November 1853 William married Elizabeth at the Register Office in Ripon and their first legitimate child George was born on the 26th December 1854 with another child Elizabeth Dorothy in February 1856 who died two months later in April.
The 1861 census shows another daughter Ann born on 3rd September 1851 in Kirkby Malzeard, her birth certificate shows mother Elizabeth Weighill, Father’s name left blank.
William died on the 8th July 1855 before the birth of his last child. I think it is fair to assume that he was the father of Mary, William and Ann and then decided to marry Elizabeth – perhaps his conscience told him he should!
The 1861 census has Elizabeth as head of the household – a widow and charwoman – living with her were William, Ann and George. In 1871 she is housekeeper to a William Jackson. Her son William is living in the village – a boot and shoe maker and Anne his sister is living with him, a dressmaker together with their Aunt Mary Austick.
1881 William is still in Grewelthorpe still a boot and shoe maker but married to Ada with children Alfred 6, Anne 4 and John William 1. Elizabeth died in 1889. Suzi would be interested in knowing if anyone is researching this family.
I am descended from the only legitimate one! George Gargrave was my great grandfather – he came down south and joined the navy.

Named on Pozieres memorial.
The cemetery is enclosed by the POZIERES MEMORIAL, which relates to the period of crisis in March and April 1918 when the Allied Fifth Army was driven back by overwhelming numbers across the former Somme battlefields, and the months that followed before the Advance to Victory, which began on 8 August 1918.
The Memorial commemorates over 14,000 casualties of the United Kingdom and 300 of the South African Forces who have no known grave and who died in France during the Fifth Army area retreat on the Somme from 21 March to 7 August 1918. The Corps and Regiments most largely represented are The Rifle Brigade with over 600 names, The Durham Light Infantry with approximately 600 names, the Machine Gun Corps with over 500, The Manchester Regiment with approximately 500 and The Royal Horse and Royal Field Artillery with over 400 names. 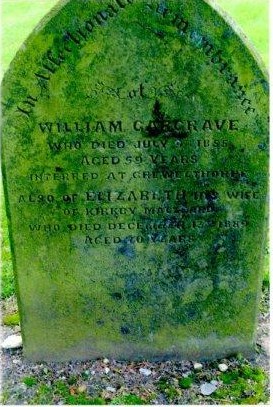 Grave of William Gargrave 1793-1855 & Elizabeth in Kirkby Malzeard.
Thanks to Suzi Nottingham for this picture.

WILLIAM GARGRAVE. Born C1850 Grewelthorpe. Son of William & Elizabeth. he was a shoemaker. Married to Ada Priscilla Wood of Northallerton in 1873.