This is an ancient Yorkshire locational surname, which derives from the village of Beckwith, in the Nidd Valley, near Harrogate. There is a house in Sussex called Beckworth Hall, but here again the original owners were of Yorkshire origin. Beckwith village is one of the earliest on record, appearing in the Anglo Saxon Chronicles as early as 972 a.d. in its correct spelling of ‘Bec wudu’ translating as the beech wood. In the Domesday Book the recording is as Beckvi.

The first recorded spelling of the family name is shown to be that of Willelmus de Bekwyth, which was dated 1379.

Message: Hi my family name is Ellerton and in a will of 1882 a Matthew Ellerton Esq leaves £24 to Sir Roger Beckwith (rent for a farm called Ewe Close House Downholme in Swaledale) Sir Roger must have also held lands in Swaledale?

If you have any further information about this. Please contact Peter or this site.

Details of Beckwith family from the Grewelthorpe, Kirkby Malzeard and surrounding area. Taken from census returns and Parish Registers.

This could well refer to Charles Beckwith above.

CHARLES BECKWITH. Born C.1837 Kirkby Malzeard. Son of Charles & Margaret.
CHARLES BECKWITH Born 1881. Kirklington near Bedale. Age 19 he enlisted in the Royal Regt. of Artillery.
[1900] For the whole of his service he was repeatedly tried and imprisoned for drunkeness. In 1905 he was discharged as being incorrigible and worthless. 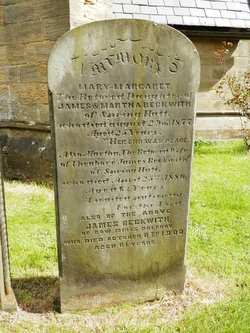 JOHN BECKWITH. 1607. Mentioned in Borthwick Institute cause papers. A case of sexual slander against his wife Frances made by Alice Abbott. They lived K.Malzeard.

JOHN BECKWITH. Born c1842 Stonebeck up. Son of John & Rachel Horner.
JOSEPH BECKWITH Born 1823 Ripon. He was a hairdresser. In 1841 he enlisted with 94th Regt of Foot. service n0.1728. He served for 21 years. Served abroad for 12 years. In East Indies & Gibralter. He had 4 good conduct badges. Once tried by court martial. Imprisoned for 5 days and demoted. Then made it back to sergeant. No medals. He was discharged in 1862 at his own request.

MARMADUKE BECKWITH SIR. Born Jan 1687. Died C1771. Son of Sir Roger & Eliz. Jenings. Emigrated to USA in 1700. He was a merchant at Virginia USA. Had 3 sons Tarply, Marmaduke & Jonathan. Jonathan was the last Baronet of Aldburgh.

ROBERT BECKWITH. Married on 11.6.1566 at Pateley Bridge to JENNET INMAN.

SARAH BECKWITH. Married John Pickersgill in 1701 in Kirkby Malzeard. Had 2 children Charles [1701] & John [1704]. Information from Nicola Simpson. See letter at beginning of Genealogy section. Oct 2011. Also see will of Charles Greeveson at the bottom of this page.

SAMUEL BECKWITH 1786 Ellingstring. He was the victim of a house robbery Losing gold and silver and other property. Men from East Witton were accused. [Ref.Leeds intelligencer 1789].

THOMAS BECKWITH. Died 1672. Lived Sutton Grange near Ripon. His son Thomas bought Lamb Hill estate of 7 May 1656. He also had a son Samuel.

The will of Charles Greeveson of Kirkby Malzeard who left book]. the bulk of his estate to the Beckwith family from Roomer. Dated Jan 1704/5.

Item I give and bequeath unto Charles Pickersgill and John Pickersgill sons of Sarah Pickersgill [nee Beckwith] of Grewelthorp aforesaid either of them five pounds to be paid when they ‘.. attaine their severall Ages of One and Twenty yeares

Item I give and Devise all my Messuages Freehold Lands Tenements and Hereditaments situate lyeing and being within the Territories of Grewelthorp aforesaid unto the said Charles Pickersgill and John Pickersgill and their heirs for ever Equally to be divided betwixt them and to enter upon the same when they attaine their severall Ages of One and Twenty yeares and not before.

Item All other my personall Estate of what bind ‘.. the same be either Billy Bonds Mortgages Goods Quick and Dead household Goods I give and bequeath unto the said Sarah Pickersgill

And I doe make the said Sarah Pickersgill sole Executrix of this my Last Will and Testament not doubting but she will honestly pay and Discharge all the Legacies above by me bequeathed my Debts and Funeral Expenses And I doe hereby revoke and make void all my Former Wills and TestamentsIn Witness whereof I have hereunto set my hand and seale this Eleaventh day of January in the Third yeare of the Raigne of our Soveraigne Lady Anne by the grace of God Queen of England Scotland France and Ireland Defender of the Faith p.. Anno ‘ Di’.. 1704/5