SPENCE. Family.
Last update Nov. 2021.
History of the surname Spence.
This very interesting name is of early medieval Anglo-Scottish origins. Introduced by the Norman French after the Invasion of England in 1066, it was a metonymic occupational surname for someone who was originally in charge of the pantry of a great house or monastery. The term derives from the pre 10th century Old French word “despense”, from the Latin “dispendere”, meaning to weigh out or dispense.
In Chaucer’s “Canterbury Tales”, the glutton in the Sumner’s Tale is described as being “all vinolent as botel in the spense”. The modern surname can be found as Spence, Spencer, and the Scottish form Spens, Spenser and Despenser.

The first recorded spelling of the family name is shown to be that of Simon del Spens. This was dated 1300, in the Charters of Guisburn Priory, Yorkshire. during the reign of King Edward 1st, known as “The Hammer of the Scots”, 1272 – 1307.

Pat Deasum from Canada sent the following information and request for help. August 2014.

Email: deasum1@shaw.ca Message: Hi, I have a James Spence born in Laverton, Kirkby Malzeard Parish in 1776. I am trying to find out more information about him and wonder if you could provide any direction. He moved to Linton-on-ouse in the Newton-on-Ouse Parish in Yorkshire where he was an agricultural labourer. There he married Margaret (unknown). He had (1) children there, two who died. George (my ancestor b. 1803), Jane, James, Elizabeth, Thomas and Mary. George Spence (b. 1803) married Sarah Bates and lived in Arkendale. Their daughter Elizabeth (married John Whitling) and their daughter Ann married John GILL. Thanks so much for any direction you are able to provide. Best wishes, Pat in western Canada.

Carol Firth sent the following information. I believe my great great grandad was James Spence born 1812 who married Sarah Lambert and that my great grandad was James son of the above born 1849
My grandad was Thomas Spence born 1883 who married Sarah Ellen Goodyear Britton Shackleton in Leeds in 1906. I believe that at one time James junior was banished to Ireland for covorting around ripon at high speeds in his trap. I would like to know more about this. Also I would like to know more about a relative named Spence who owned a timber mill and was lord mayor at one time. I think he was either a great great grandad or great great uncle of mine.
Does anyone remember a Lily Coates, I believe she ran a pub in Ripon, who I believe was a great aunt of mine. Thank you.

Carol sent this request in Jan 2012.
Is anyone on this site related to a
Sibill Strickland b. 1563 approx. She married William Lambert born 1567
approx.
Their decendent Sarah Lambert. Born, 1816, Ripon area. married James Spence. born 1812. Ripon Area.
I would like to know Sibill’s exact date of birth, it has been
suggested we may be a century out, or if indeed she was connected to
the Sticklands of Westmorland or Leeds.
Many thanks Carol.

Denise is seeking information about her 5 times Great Grandfather Thomas Spence who worked in the Unicorn Hotel Ripon as a boot boy. He was also known as Tom Crudd and Old Boots. If you can help her please

Peter Cockerill would like information about Thomas Spence, Shoemaker of Grewelthorpe from 1841 to 1881.
Rose Hay is also interested in ancestors of James Spence b. 1812 the Cooper.
If you can help please contact this site.

Jean Greenwood would like information about James Spence b1812 Grewelthorpe and his children particularly John Spence born 1828.

There has been a problem trying to contact Jean Greenwood. If she sees this will she please contact Carol Firth.

Jenni Corner sent this comment. Robert Spence was born in your area in 1784 and his son John Foster Spence was a Mayor in North Shields. I’d be interested if anyone knows more about him.

G. Hammond from Canada is seeking information about Elizabeth Spence[b.1801 d.1881] who married John Hammond. of Knaresborough in Ripon in 1822.


Joan Malcouronne is seeking information re. Joseph Spence b1805 & his wife Elizabeth [b1816].

Ann Fitzpatrick is seeking information [July 2012]
I am trying to trace information about my great grandmother Elizabeth Spence born 1842 in England. Her parents were Christopher John Spence and Elizabeth Christiana Davidson, who I believed married on 26.01.1837. If you have any information that would help me I would be greatful.

Frances Hoffman of Canada is seeking information re James Spence b.1812. She writes [Dec 2012].
Dorothy Mary Steel, nee Whitley, was my 3x great-grandmother. She was born 1812 and died 1900. James was her second husband. I’m interested in connecting with descendants of James Spence – see below.
JAMES SPENCE. Born 1812 Grewelthorpe. Son of Thomas the Farmer. Husband of [1] Sarah Lambert of Kirkby Malzeard and [2] Dorothy Mary Steel of Stockton. He was a cooper. Living Ripon 1871. Sarah Lambert died 1868.
If you can help Frances:-

The following information about the Spence families of the Grewelthorpe area have been taken from census returns, parish registers etc.
Last updated Nov 2021. 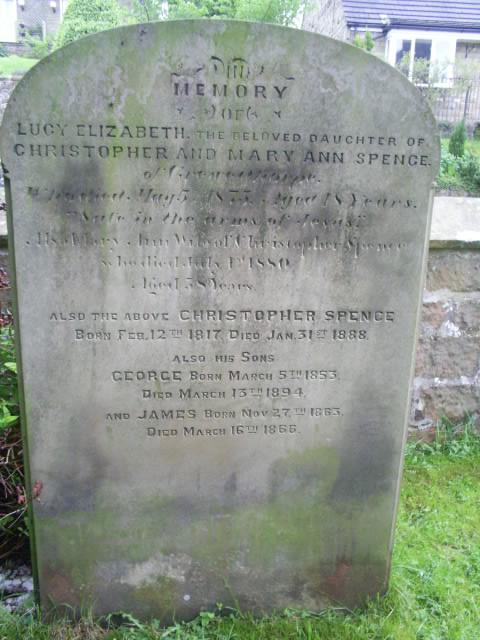 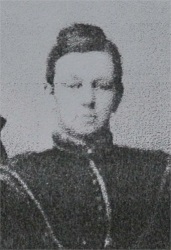 Report in Bradford Observer June 1836. Not sure which John this refers to.
West Riding Sessions at Skipton. John Spence for stealing at Kirkby Malzeard a piece of ham belonging to John Beck and also stealing at Grewelthorpe a quantity of wearing apparel, the property of William Kirby Found guilty and transported for 7 years.

Report in York Herald. May 1879.
Matson Spence Cattle Dealer of Grewelthorpe was summoned for ill treating a cow by neglecting to have her milked. Fined £1 including costs.
Report in Knaresborough Post 1880.
Matson Spence and David Richmond were summoned for using a gun without a license to kill game.
They were both fined £1 and costs.

Excerpt from History of the Unicorn Hotel, Ripon.
THOMAS SPENCE. 1760-1780.
During this period the Unicorn was famous for a character known as Tom Crudd or “Old Boots”. His real name was Thomas Spence. “This extraordinary person was favoured by Nature with a nose and chin so enormously long, and so lovingly tending to embrace each other, that he acquired by habit the power of holding a piece of money between them.” Being a servant of the Unicorn Inn in Ripon, Yorkshire, it was his business to wait on travellers who arrived there, to assist them in taking off their boots. He usually introduced himself in the room with a pair of slippers in one hand and a boot jack in the other. “The company in general were so diverted with his odd appearance that they would frequently give him a piece of money on condition that he held it between his nose and chin. This requisition he was always ready to comply with, it being no less satisfactory to himself than entertaining to them”. 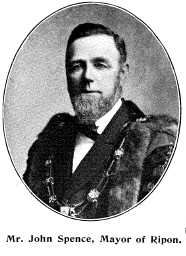 Photo submitted by Jean Greenwood.
JOHN SPENCE. of Ashley House, Ripon. son of the late Mr. James Spence. was born at Grewelthorpe on Nov. 6th 1838 and educated at Mr J.Dunnington’s private school. He was in business in Ripon as a timber merchant. Various branches of the Spence family have been connected with the muncipal life of Ripon for centuries. John was a member of the Council from 1873 to 1879 when he did not seek re-election. he was chosen as Mayor from outside the Council in 1900 and re-elected as Mayor for the Coronation Year in 1901. On both occasions unanimously. He was for a number of years a member of the Ripon Board of Guardians and Rural Sanitary Authority, a Church warden of the Cathedral, and a trustee of various institutions connected with the city. he was Hon. secretary of the Ripon Agricultural Association and a practical agriculturist.
Photo by courtesy of youroldbooksandmaps.co.uk.

Article in the Yorkshire Gazette April 1888.
“A Freak of Nature” On Tuesday , a goose belonging to Mr T. Spence, East Witton
hatched a fine gosling, which had 4 perfect legs, 2 black and 2 white.