Here are some details about the Pickard famly which lived in the Grewelthorpe area according to census returns and Parish records.

Researched by B.Bradley . Last update Nov 2021.
Please contact the site if you have any further information.

Just been reading about my ancestors on your wonderful site.
John Pickard was my great grandad and John Robert Pickard was my grandad.
Both interred in Kirkby Malzeard cemetery.
Feeling so proud.
Many thanks.
Elaine Williams neè Pickard.


Thanks Elaine for information about her family.

ALFRED JAMES PICKARD. Born C. 1866 Grewelthorpe. Son of James G [the Draper] & Mary J. Married to Mary [b.1863/5.] Living Potter Newton 1891. Living Grewelthorpe 1901. Alfred a joiner, carpenter.
Alfred emigrated to New Zealand with his wife and two children. They are buried in Dargaville. Thanks to Jennifer Demier for this New Zealand information. [Feb 2018]. 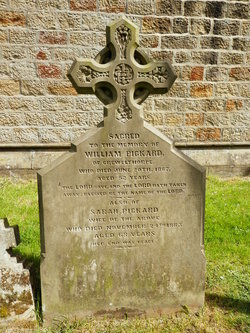 
Obituary of William Pickard in Richmond & Ripon Chronicle. 1867.
The late Mr. William Pickard was a native of Grewelthorpe in which village he spent the greater part of his life.
For many years he was the head of a private boarding school in his native village and by his kind treatment of his pupils and his anxious care for their improvement he endeared himself to both his pupils and their parents.
He was a true son of the Church of England and for some time presided at the organ in the Grewelthorpe church. For many years he was a member of the choir and for 2 years he was the vicar’s churchwarden.
He filled most of the parochial offices with ability and integrity, and to the entire satisfaction of the parish.
He was esteemed by a large circle of friends. He was a good husband, a kind and indulgent Father, a sincere friend and good Christian. He died on the 20th June, loved and deeply lamented. He was interred on the Fest of St. John the Baptist, in a vault under the West window of Grewelthorpe church. There he awaits the resurrection of the just.


Notice in London Gazette May 11 1860.
Pursuant to a Decree of the High Court of Chancelry, made in a cause wherein John’ Anton is plaintiff, and William Pickard and others are defendants, the
creditors of William Pickard, late of -Grewelthorpe, in the
county of York, Carpenter, who’ died on or about the 13th
day of September, 1858, are by their Solicitors, on or. before
the 14th day of June. I860, to come in and prove their
debts at the chambers of the Vice-Chancellor Sir John Stuart,
No. 12, Old-square, Lincoln’s-inn, Middlesex, or in default
thereof they will be peremptorily excluded from the benefit
of the said Decree. Thursday, tlie 21st day of June,
1860, at twelve o’clock at noon, at the said chambers, is
appointed for hearing and adjudicating upon the said claims.
‘ Dated this 10th day of May, 1860.