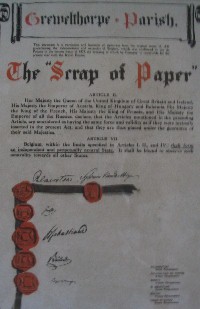 
Of these men, the 1901 census tells us that Herbert Thwaites was born in 1890 and was the son of Joshua Thwaites [stonemason] and Ann. Living in Kirkby Malzeard. Fred Waite was born 1899 in Grewelthorpe. Son of John Waite[Roadman] and Ellen.


How Lieutenant H. G. Brown won the Military Cross.
The following is the official account of the services for which the Military Cross was awarded to Lieutenant H.G.Brown, fifth son of the late Mr. Joseph Brown of Hill House, Fountains, Ripon and Mrs. Brown, The Green, Grewelthorpe. “For conspicuous gallantry and devotion to duty at Essorts, April 3rd 1918. The headquarters of the Brigade, the signal section of which was commanded by Lieut. Brown , was shelled constantly throughout the day. In spite of this Lieut. Brown succeeded in maintaining communications both forward and to the rear. He displayed most conspicuous gallantry in supervising the work of his section under heavy and continuous shellfire, on many occasions himself repairing the broken wires. Never throughout the day did he consider the enemy’s fire or his own personal safety, so long as his command stations were complete.


Thanks to Trevor Kitchen for sending this additional information [September 2020].

Detail for your WW1 Roll of Honour :-Your Honour detail lists the following Brown brothers .
Brown Chas. M. ,Sergt.RGA 1917
Brown Donald T. R.E. 1915.
Brown Henry G. ,[M.C.] Lieut R.E. 1914.
[The 3 Brown boys were the sons of Joseph Brown & Mary of Markington.
You can link a fourth son to Joseph & Mary from your Honour Roll.
Wounded Brown Robert E. Sergt. C.F.A. 1915 as a 4th brother. (Robert Ernest) Mary Ann Brown, b. 1853 Menwith Hill Darley, mother to the above four is listed as living in Grewelthorpe 1916, on her son Robert Ernest’s military records, who served with the 77th Battery Canadian Field Artillery.(Mary Ann Brown is listed on the Electoral Roll for Grewelthorpe into the 1930’s.)
Her son Donald James Brown gives his address as Hillside Grewelthorpe, on his discharge from military service with the Lowland Regiment Royal Rngineers.Robert. Ernest Brown, his wife Clara (Julian) and son Robert Julian Brown emigrated to Canada in 1910/11. On his military record his occupation is listed as “Chief of Police” for Davidson Saskatchewan Canada
.Mary Ann Brown’s Husband Joseph farmed at Hill House Fountains until his death in 1909.
WW1 Honour Roll additional detail.Nursing Service Taylor Rose T. V.A.D. I believe this is Taylor Rose Tomlin Taylor b. 9th Jul 1892 Gorton Manchester, daughter of Robert Henry Taylor b. 1864 Burton on Trent and Anna Maria Tomlin b. 12th Mar 1865 Cheetham Manchester.
From Red Cross records :-Rose trained at the Drill Hall hospital Ripon and later served at The Red Cross Hospital Corsham.
Nursing Service. Hardcastle Hilda V.A.D. I have no concrete medical research detail for Hilda Hardcastle, however I believe she was the grandaughter of Thomas Hardcastle b. 13 mar 1834 Bewerley and his wife Ellen (Cooper).Thomas’s eldest Son Cooper Hardcastle b. 1862 was a medical student in Edinburgh 1891 living with his wife Amy Widburd whom he married in Paddington New South Wales Australia in 1886.His daughter Hilda Amy Hardcastle was born in Edinburgh 1891, travelled to Australia with her parents but returned to the UK in Aug 1913 with her mother. Hilda’s mother Amy Hardcastle (Widburd) died 8 Apr 1816 Ripon. I suspect that Hilda was living in Grewelthorpe with her Grandparents and as she was the daughter of a doctor (Cooper Hardcastle) and at 24 ish possibly a doctor herself was a candidate for a medical volunteer. The research regarding Hilda Hardcastle is an educated guess but the research facts suggests my guess is close to the mark, may be ?.