The trials and tribulations of providing a decent water supply and adequate drainage to the village of Mickley.

Researched from newspaper reports at the time.

MICKLEY WATER SUPPLY & DRAINAGE.
Providing a water supply to the village was discussed for several years.

In 1904 Mr. Simpson of Burton Leonard submitted a supplement to his report of last year on the Mickley water scheme. He had examined and tested the springs mentioned in the first report and found them inadequate. He proposed a fourth scheme for tapping an existing spring called Fountains Acre Spring. adjoining Mr Arton’s property. The present overflow was 10,800 gallons per day, which was a greter supply that eve couild be needed. The service tank, catching pot, main valves and hydrants would be similar to first scheme.


In 1905 It was reported that The Craig Spring was too far away and would be too expensive for a small village like Mickley. The committee wish to see Mr Arton to see if some arrangement could be made with him to take water from the spring at Manor House Farm This would cost about £400.


In 1906 Mr Hymas the engineer for the Mickley water supply scheme submitted his report. He had inspected the Spring on the hillside on the SW of the village. In his opinion not reliable. He examined Old Man’s Well which seemed inadequate. It was too low down and could not be pumped to the village without force being used. The best supply was Carr House. Mr Snowden the agent for the owner said that he should want a compensation reservoir making there, but afterwards said they would not press for that. The ground had been levelled and he found that there was a fall of 20 to 30 feet. and the distance was 1800 yards. He estimated up to £400 to bring the water down. A storage tank with 1000 gallon capacity would be needed.

In 1908 the County Medical Officer visited the village and submitted his report.
At the East end of the village some 20 houses fetch their water from 100-200yards away whereas at the other end of the village there was an adequate supply for only about 9 houses. The water issues from a very steep bank almost overhanging the millrace. He thought that a scheme could be formed to use this water for the whole village. He reported that 17 houses had no drains and that 11 drained into cesspools, some of which overflow into the river Ure. He recommended that the Rural Council be asked to take steps to remedy the situation.

1908. Another report from a surveyor said that he had taken levels at Mickley and that the water from Old Man’s Well will not gravitate thro the village. This is a strong spring of 3,000 gallons per 24 hours, he suggested to the Council that this spring could supply water to one end of the village. The other end of the village could be supplied from a spring on land owned by the commissioners, or by boring. An alternative scheme for the whole village would be Carr House which was the best but would be expensive.
As for the sewage, there was only one piece of land in the village suitable for treating the sewage. The council would have to see if the land was available.

In 1909 a scheme was proposed which was going to cost £400. which would be a very high rate for Mickley where a 1d rate only produced 2 guineas. It was felt that would saddle the village with serious expense for years to come. They wanted to ask Mr Arton if he would allow them to put in a tank to collect the spare water from the farm. Also would he allow a pipe from Old Man’s Well as far as the top public house. divided into 3 parts. That would meet the needs of the village for some time to come. Dr. Collier said if they could not get a tank then perhaps a deep bore well could be sunk. The matter was adjourned pending Mr Arton’s reply.
In 1909 Miss Staveley wrote to the Council offering a grant of land at Mickley for sewage disposal, for a term of years, the Council paying a small acknowledgement, also the original cost of the present sewer and inspection chamber, and all the legal costs in connection with the matter.

In August 1910 A meeting had been held with Mr Arton They had examined the spring which had been opened out, and certainly there was a gain of over 2 feet and as far as they could see a stronger run of water. Mr Arton agreed to let them have the spring from the higher level and run the pipes down the village and have the pumps according to the estimate by Mr Hymas at various points in the village. with a clean run out at the end of the village.
In 1910. An agreement had been made with Mr Arton , the owner of the Spring.
A resolution was passed that the scheme be carried out in the terms of the agreement. to provide a supply of drinking water to Mickley. It was agreed to bring the water down as far as the public house. 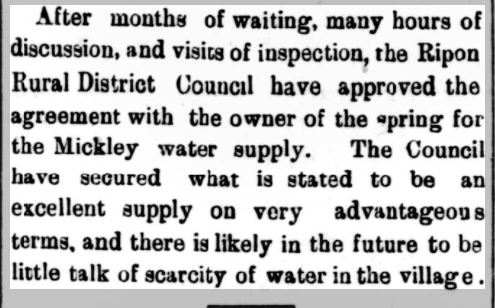 In 1911 Mr Arton had agreed to the tank, The Medical officer and the council met with Mr Arton & Mr Hymas and went to Mickley. They went over the whole scheme. All was well, the water was beautifully clear, the water in the tank was as clear as gin. A few alterations were needed and once these had been carried out they would take over and commence paying interest on the capital. It was a very cheap investment and Mr Arton was thanked for carrying out the scheme and finding the money and relieving the Council of a serious responsibility. As Lord Masham had done for Masham, so Mr Arton had done for Mickley. He had paid for the expense of taking the water down. The Council would be paying Mr Arton 5% on the outlay.


In 1911 it was reported that the Mickley water scheme had been carried out and completed at a total cost of £170. which meant an annual payment by the council of £8-10s. 99 years lease secured.