Does anyone remember Edgar Chapman, who lived in Grewelthorpe?
This is from a page about the Leeds Pals memorial in Colsterdale.


My grand father Edgar Chapman trained at Breary Banks. He was wounded in the battle of the Somme in 1915 and was invalided out of the service in 1919. He retired to the village of Grewelthorpe, not far away from the memorial and every year sometimes with my Aunt Eileen his daughter he would go along and clean the memorial before the annual service at the site. Edgar died in 1952 a brave man who served his country under terrible conditions. He was great man and I loved to be in his company and I was very proud to have been his friend. Richard Chapman, grandson now living in New Zealand but visit Yorkshire most years.

Edgar also gets a mention in the Yorkshire Post in an article about War Memorials in Yorkshire.


Until his death in 1952, Edgar Chapman of Grewelthorpe, who served with the Pals and was wounded on the Somme, took care of the stone tower, ensuring it was in good order for an annual service on July 1. 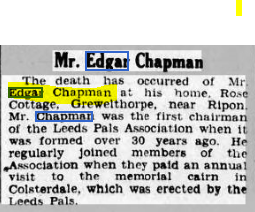 Message from Andrew Fox November 2014. If you can help please contact the site. Message: COULD YOU TELL ME IF THERE IS SOME ONE RELATED TO A G.B. CHAPMAN , I HAVE A WW2 BADGE IN GOLD THAT HAS HIS NAME ON , F/O G B CHAPMAN
Last update Nov. 2014.