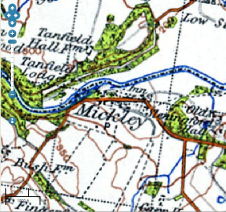 The Mill at Mickley on the banks of the River Ure was used for spinning Flax which was used in the manufacture of Linen.
In 1851 according to the census returns for Mickley there were approximatley 100 people living in the village who worked in the mill. This was boosted by a large number of Irish immigrants who fled Ireland because of the potato famine. About 27 Irish people were lodging in Mickley The oldest was 29 and the youngest 10 years old. There are a number of gravestones of Irish Catholics in Mickley graveyard.

People moved from all over Northern England to come and live in Mickley and work in the mill. From Cumberland, Durham, Newcastle, Leeds, a lot from Otley, Selby, Whitby, Osmotherly, Stokesley, and one from London. Many people provided lodgings for these incomers.
The jobs available included Mechanics and waggon drivers and a book keeper, as well as Spinners, weavers, dressers, doffers, reelers, prepairers, bleachers, winders, spreaders, finishers & overlookers. In 1851 there were 2 Masters Robert Atkinson and John Dinsdale and a retired Master John Braithwaite.


Some of the jobs in the mill:-
Doffers. the name given mostly to women who doffed or tied up the full spindles of linen thread and quickly replaced this with a fresh empty spindle.
Drawer. Draws warp yarn through loom parts to arrange warp for weaving specified pattern, following pattern chart: Reads pattern chart to determine information, such as type warp to be drawn, number of harness frames, and type of reed required for pattern.
Lapper Cuts and removes waste yarn entangled around machine parts of yarn texturing machine, using knife: Observes machine positions to ensure yarn ends are running through automatic cutters and that drop wires are set, and to detect defective cutters or uncut waste yarn left from previous shift. Cuts waste yarn caused by yarn breaks from machine parts, such as feed rollers and takeup packages, using knife. Removes feed rollers to cut waste yarn, and realigns and tightens rollers, using wrench. Sweeps waste yarn from around machines and catwalks, using broom, and deposits yarn in receptacles. Pushes cart loaded with textured yarn to yarn cleaning area. Transports boxes filled with empty color-coded takeup rolls from storage area to machine area, using handtruck.

Reelers. tended the machines that wind yarn, thread, or textile selvage from bobbins, cones, cops, or tubes into skeins for dyeing or shipment as well as placing supply package of yarn, thread, or selvage on spindles.

Rovers. removed the flax from the machine after it had been twisted onto bobbins.

spinners and weavers.
The loud noise of the machines coupled with the dampness and smells made working life difficult. Those who were employed in the preparing rooms suffered particularly badly as the dry flax dust, or pouce, in these areas could cause lung problems and shortness of breath.
First the flax leaves (usually Phormium tenax) were cut, tied in bundles and taken to the mill. Then the leaves were fed through the stripping machine, which made a loud shrieking noise. A worker sat underneath the machine in the so-called ‘glory hole’ to catch the slimy fibre and bunch it.
The ruins of the flax mill can still be seen. 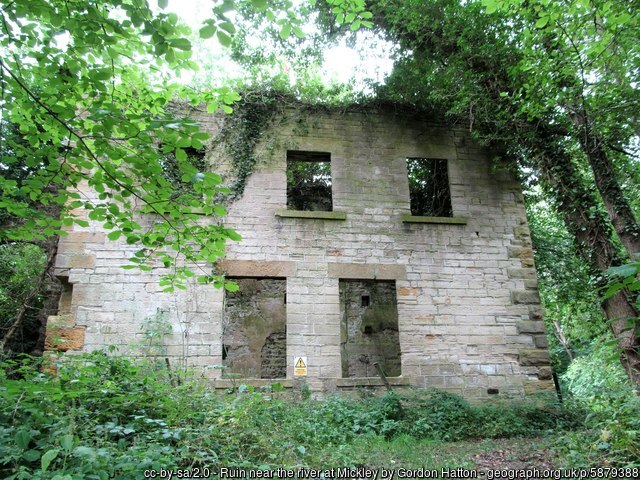 
In January 1840 two men, William Gill and John Granger were drowned whilst trying to cross the river near the mill weir. They were trying to take cattle across the river by the ferry, the boat broke free and was carried downstream in the fast flowing river. The men, fearing that they were being drawn towards the mill dam, jumped off the ferry and they drowned. 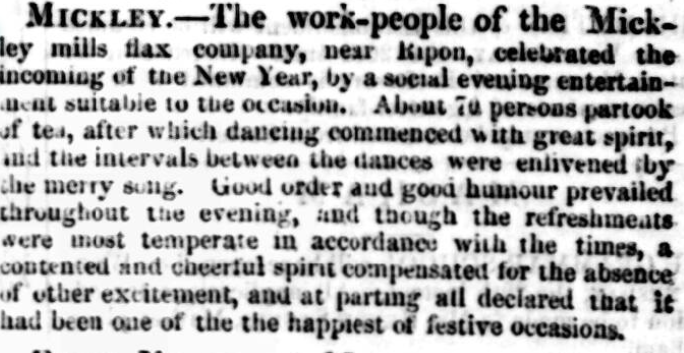 In 1859 Mickley Flax Mill was put up for sale, situated on the banks of the River Ure. It had water wheels, a warehouse and other buildings. Also for sale was a house and 15 cottages. In charge of viewing was Mr. Wm. Thackwray.


In 1870 the population of Mickley was 270. About half of these people worked in the Mill. There was a church a chapel and a school.
According to Mr Frederick Calverly, Mickley Mill closed in 1882. [See the Claverley Diary on this site].


In 1876 there were complaints about young people, probably mill workers, poaching salmon and other fish from the river below the weir. 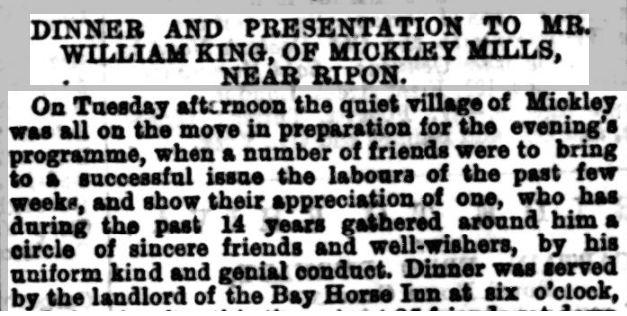 Notice of sale being held at the mill in 1892.
==
Research by Barbara Bradley.