If anyone knows the whereabouts of the map which should accompany the Inclosure award documents.
please contact this site as this map has been lost for many years.

The Inclosure Acts were a series of Acts of Parliament that empowered enclosure of open fields and common land in England and Wales, creating legal property rights to land that was previously held in common.

The Inclosure Act was applied to the Parish of Grewelthorpe in 1780/82.

Within the Manor or Township of Grewelthorpe, in the Parish of Kirkby Malzeard, in the West Riding of the County of York, there are certain Moors, Commons or Waste Grounds, containing in estimation 1700 acres, commonly called or known by the several names of Grewelthorpe – High Moor, Low Moor, Outlay Potts
and Bull Pinks. 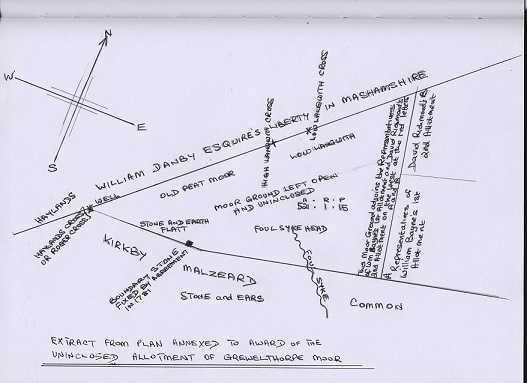 Map of part of the Grewelthorpe Moor area.

The Lord of the said Manor was Sir John Goodricke of Ribston.
The Rev. Edward Moises was vicar of Masham & Kirkby Malzeard and so entitled to all Vicarial Tythes arising within the Township of Grewelthorpe.

The Commissioners appointed the following as Arbiters to deal with any claims, objections & disputes.
John Hardcastle. of Bedale.
William Chaytor. of Spennithorne.
Anthony Dawson. of Ripon.

Any of the moorland which was not good enough to be divided it was to be called a Stinted Pasture and left unenclosed.

A piece of land known as The Camp was allotted to William Aislabie. his heirs and assigns.

521 acres of land known as High Moor was deemed bad and not good enough to be divided into separate allotments and not be useful as stinted pasture. This land called Old Peat Moor, Langwith & Rakes. “shall remain open and unenclosed and be field and enjoyed by several persons interested thereon for the only purpose of getting peat, earth, ling, turves and stones.” 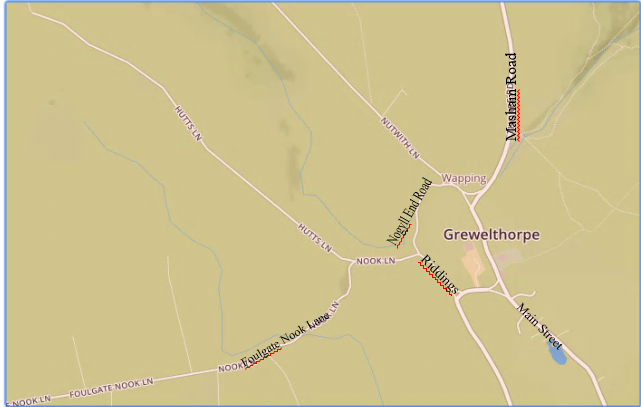 On the area of land known as Low Moor the commissioners decreed that a public road should be made,
40 feet in breadth, between fences, leading from an ancient gate called Quarry Gate westward over the said Low Moor by Billy Keld and Foulgate Nook and so over Rakes and back to Kirkby Malzeard Common. This road to be known as Foulgate Nook Road.

Another public carriageway, 40 ft in breadth between the fences, leading from the Ancient Gate called
Town End Gate North westward through and over Low Moor up Nutwith in the direction of William Danby esq liberty in Mashamshire. This road to be called Nutwith Road.

Another public carriageway or Highway, 40ft in breadth between the fences, leading from the North end of Masham Lane Northward through and over Low Moor. This road to be called Masham Turnpike Road.

A Private Road, 20 feet in breadth between the fences, for the use of the occupiers of several allotments adjoining, and also other users, leading from the South end of an Ancient Lane called Riddings Lane.
South westward into Nutwith Road. This private road to be called Riddings Road.

Another Private Road branching out of Nutwith Road near the Town End Gate and leading Southward to the Quarry Gate this road to be called Nogyll End Road.

Another Private Road , 26.5ft in breadth ,between the fences for use of the occupiers of several allotments adjoining and for other uses as before, branching out from Foulgate Nook Road at the North East corner of an allotment awarded to John Thwaites and leading westwards to an Ancient Gate at the South East corner of an ancient enclosure belonging to Jane Hodgson called Near Newlaid to be called Hutts Road.

A Private Carriageway 20ft in breadth called Windhall Road. which runs from an Ancient Gate on the SW corner of an old Inclosure belonging to Benjamin Richmond. called Far Wood Close. and thro David Richmond’s inclosures.

A Private Carriageway 33 ft in breadth. Called Masham and Ilton Road. Leading from an ancient gate at the west end of Blackhill House and running North east to another ancient gate on Black Pasture. There turning North along the East side to Macaw Well. to and into the Peat Road.

A Private Carriageway 33 ft in breadth called Masham Road. Leading from an Ancient gate at the North West corner of an old enclosure called Fat Pasture and northward into Mashamshire.

A Private Carriageway 33ft in breadth called Peat Road. This road to be used by the inhabitants of Grewelthorpe for leading peats, turves, ling and stones from the Moor Ground.

Bridle Ways and Footpaths.
A Public Bridle Road for public and private use. 10ft in breadth. Branching out of Foulgate Nook Rd and winding south eastwards to an ancient gate at the north end of Booms Lane.

A Public Footpath for public and private use. 4ft in breadth. leading from an ancient stile in Kirkby Malzeard called Mumpley Gate Stile North westward into Foulgate Nook Road.

A Public footpath 4ft in breadth. leading from an ancient stile in Kirkby Malzeard called Allams Stile going north westward in a direct line to join the previous footpath.

A public footpath 4ft in breadth. Out of Hutts Road going westward to an ancient stile called Oak Stile Close.

A public footpath 4ft in breadth. Leading out of Nutwith Road. going north and north west and into Masham.

Land on Low Moor 3 roods and 22 perches. Near to Nogyll End to be used as a Common Quarry.
To be used for the purpose of getting stone. gravel and other materials for the repair of the new public and private roads. Also for repairing buildings, houses and allotments and for repairing the Ancient Roads in Grewelthorpe.

Land on Low Moor bounded East by Nogyll End and West by William Atkinson’s allotment and nearly North by John Geldart’s allotment and South by Foulgate Nook Road. to be made from waste and common land a Town End Quarry.

Also 2 roods of land on Low Moor to be used as a common watering place, situated on Nutwith side, and bounded East and West, North and South by Samuel Wrather’s land. and Nutwith Road. This to be called Jockey Well watering place.

Some of the names of fields and where known the situation and name of the occupier as found in the Inclosure Awards.

Keld is an old word for a spring or body of water.

Hough means a ridge of land.

Thieves Gill. near to the Hackfall Estate.

I am interested in gathering together the old names of the fields around Grewelthorpe. If anyone can help with this project please contact me. Barbara Bradley.

Names of individuals referred to in the Inclosure award documents, not already mentioned above.


If anyone can help with gathering together the old field names in Grewelthorpe please contact Barbara Bradley. [Dec 2021}.