Seven miles away over the trees
traffic on the A1 snakes and glitters between Dishforth and Leeming,
yet the only far-off sound is the river, here where land folds into deep gorges.

I can see down through almost the whole wood
where birdsong scatters.
Beech trees on a rock ledge wrestle with their own strength.

Paths go down to the river’s roar
through mud that clutches every step.
in still- leafless February.
Afternoon sun opens the woods to spaces among branches,
twigs riding the sky.
dens of bracken are smashed, and now
down there is something like a bronze treasure,
freakish gold where the river coils.

What is this marvel in the Hackfall gorges?
I stop half way on the trail down,
Still can’t find the source of it.
Then I see the hill opposite,
Pinnacled, pyramid shaped,
Shining into the river, scaling it over.
A hill of fiery trees in fierce sunlight is changing wetness of rock, channels,
Pools, currents to gold.

Seen through threadbare spaces
A dragon of water, slipping
Out of water into metal,
Then slowly back, as if being remembered while it happens,
Never simply river this time of year,
Changed by a fiery hill to more than itself
From this point in the woods in leafless Spring, added to, made new.

The River Ure at Hackfall. 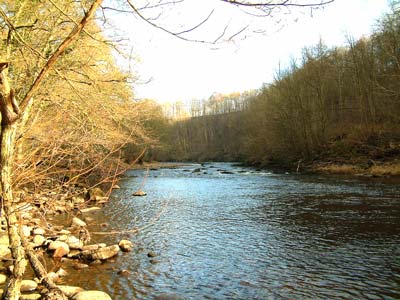