The following article is from The Penny Magazine of the Society for the Diffusion of Useful Knowledge – April 4 1835 and draws from earlier articles. 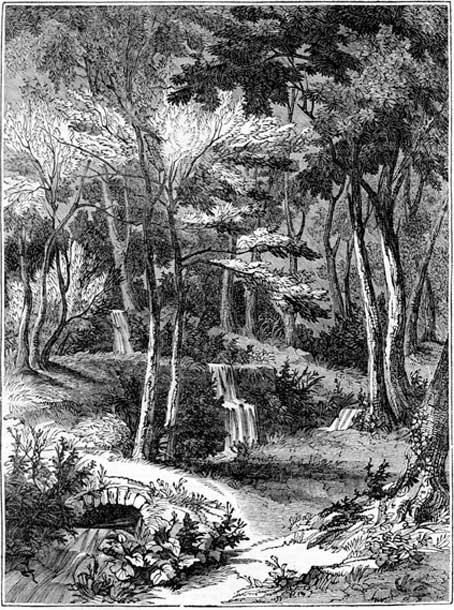 Hackfall is situated about seven miles north-west of Ripon in Yorkshire, The name is supposed to be derived from “hag,” a witch, and “ fall,” a descent, the compound signifying “the witch’s valley,” and indeed there is no situation which old superstitions might have been more likely to mark out as a fitting abode for unearthly beings than this deep, gloomy, and sequestered vale. Others, however, think that the name is probably a corruption of Ac-fell, Acorn-hill, which it might be fitly named from its rich plantations of oak. It is worthy of remark that the beauties of this romantic spot lie within so circumscribed a district, that to a traveller on the road, or a peasant in the adjoining fields, their existence would probably be quite unsuspected, nor is there any thing in the tame character of the surrounding country which could lead the lover of the picturesque to look for that exquisite combination of natural effects, tempered and improved by art, which Hackfall offers.

The entrance into the grounds is pleasant, but not very striking. A little rivulet, rising some distance, runs into a deep woody glen, and forms three or four small pools, on issuing from which it makes as many cascades, judiciously varied in their forms. It then flows with precipitancy to the river Ure, at the bottom of the dell, rushing over reeks and heaps of stone which obstruct its passage, and making a number of water-falls more or less full and rapid. At a short distance from the second gate two springs issue from the rock: and fall gently down its side. A little further down the visitor conies to a hill, from whence the water springs and forms a double cascade, which, after rushing over rocks and beds of stone, joins the rivulet below. Still further on there is another spring, somewhat less than the former: and, after passing a hill crowned by an artificial ruin, a winding walk, under a shade of lofty trees growing on a steep bank, conducts the spectator to Fisher’s Hall, a small octagon room built of petrified substances formed by several springs in the ground, and surrounded by hanging wood. At this spot two cascades are divided by a grove of fine trees. That on the left impetuously forces its way over a slaty rock, overhung with the spreading branches of the adjoining wood, the other falls down an irregular bed of rocks, but not in such strong breaks as the former. Without minutely detailing the successive cascades, and other objects and points of view which intervene, it may suffice to mention that an arrangement of the most interesting walks, through landscapes that cannot be excelled in variety and picturesque effect, lead to several romantic situations in pleasing succession, and at length to the summit of a rock called Mowbray Point, a commanding eminence, from which the most grand and extensive prospects are obtained.

Mr. Gilpin says, that he scarcely remembers to have anywhere seen an extensive view so full of beauties and so free from faults. In the immediate vicinity, variegated valley, the river confined between its rocky banks, and bordered by impending hills and woody summits, with a number of villages and farms, compose a beautiful assemblage. The distant objects also form, a prospect which may be ranked among the finest in England. In the front are the whole range of the Hambleton Hills and the town of Thirske, with an extensive and fertile country intervening: towards the right are Gilling and Craike Castle, the Cathedral of York, at the distance of thirty miles, and the Wolds in the East Riding, forming the boundaries of the view, while, towards the left, the mountain called Roseberry Topping is distinctly seen at the distance of forty-five miles, and the prospect terminates among the rugged heights of the eastern moors.

he spring represented in our wood-cut is impregnated with alum, which abounds in the strata of the adjacent district, and is worked to a considerable extent in the neighbourhood of Whitby, Guisborough, &c.

The particulars concerning Hackfall in the above account are chiefly derived from the ‘ History of Ripon,’ the ‘ Beauties of England and Wales,’ and the ‘Gentleman’s Magazine’