This article was written in June 2007 for the Darlington & Stockton Times. The author is unknown.

MAVERICK, PAINTER, POET ‘ ALL FOUND MAGIC IN THE WOODS. 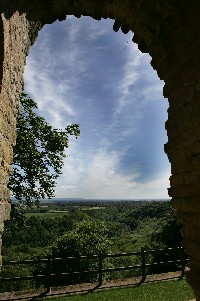 A magical place exists near Grewelthorpe, close to Masham. It is a place like no other. An internationally important landscape boasting a castle, grottoes, rustic temples and ruins within the setting of an ancient woodland.

It was bought by a maverick 18th century Chancellor of the Exchequer who was eventually imprisoned in the Tower of London and it provided inspiration for the work of renowned painter, J.M.W.Turner, and Poet Laureate, William Wordsworth.

But despite its rich history and myriad treasures, which are housed in no less than 114 acres of ancient woodland, Hackfall is a hidden jewel that passers by might not even realise is there.

In fact, it was almost completely forgotten for half a century until in 1987, it was saved by a groipof people whose mission was to restore it to its former glory.

Hackfall can be found where the narrow valley of Grewelthorpe Beck drops steeply to join meandering gorge of the river Ure. The gorge is cut into the sandstone and shales of the millstone grit series and is not visible from the Grewelthorpe side.

The precipitous sides of the Gorge come as a considerable surprise when approaching Hackfall from the West.

The eastern boundary of the conservation area is the centre of the river, which is the district boundary, but the Hambleton side of the gorge is vital to the character and setting of Hackfall.

There are various theories about where the name Hackfall comes from. One is that the name is derived from the word hook, which referred to a bend in a river, and fall, which meant a place where trees had been felled.

A more pleasing explanation of the name is that it evolved from Hag Fall, a reference to a myth that told of a witch’s death on the land.

The modern day equivalent of Hackfall in its heyday would be the Eden Project. It startled Georgian visitors and helped rewrite the gardening rule books by blending untamed natural features with man’s artifice.

Hackfall has no fewer than four Grade 2 listed buildings in its Grade 1 gardens, including Mowbray Castle, Fishers Hall, the Rustic Temple and the ruin at Mowbray Point. It nestles in the Nidderdale Area of Outstanding Natural Beauty, boasts the status of a Site of Special Scientific Interest and is within eponymous Hackfall Conservation area.

Aislabie, already famous for his landscaping work at nearby Studley Royal, bought the land after being released from the Tower of London. He had been imprisoned there in 1721 for his part in the South Sea Bubble, the disastrous Stock Market crash of 1720, which was described by Parliament as a “most notorious, dangerous and infamous corruption.”

After his death, his son, William, finished his dream by landscaping Hackfall in the naturalistic manner his Father pioneered. When the gardens were completed in the 1760’s they were considered one of the premier points on any Gentleman’s Grand Tour.

In 1810, Wordsworth recommended the site as a place to visit in one of his tourist guides. Then in 1816, Turner painted the view South from the Sandbed Hut.

However, the 1900’s heralded what looked like the beginning of the end for Hackfall. In 1910, parts of the wood were stripped of their timber and then, in 1934, it was severely damaged after it was sold to a timber merchant. After this, the land was neglected untilit eventually became shrouded by near-impenetrable woodland.

By the 1980’s, Hackfall lay in disrepair and all but a few locals remembered the glory that had existed. It seemed the charm of Hackfall would be lost forever.

Then in 1987, the Hackfall Trust was formed. The group is made up of hard working local people who dedicated themselves to uncovering Hackfall’s follies, grottoes, ponds and paths.

Now, in 2007, Hackfall look forward to a £1m Heritage Lottery Fund Grant that will ensure work to restore, repair and protect Hackfall will continue for many years to come.

Heather Swift, of the Woodland Trust, said: “Visitors can finally experience the Aislabies’ full genius at Hackfall. And there is an awful lot of genius to see. This is one of the most remarkable places to visit for gardeners, ecologists and naturalists alike. Hackfall didn’t just help to invent modern gardening, it made the most of outstanding natural richness. For a man who wound up in the Tower of London, the remarkable John Aislabie might not have balanced the books, but he certainly knew how to garden.”

Vicky Williamson, grant co-ordinator for the tust, said some of the money would be used to make the site more accessible.

“Hackfall is a designated Ancient Semi-Natural Woodland and at 114 acres with 11 follies, monuments and waterfalls, it is easy to see why this site was of such importance.” she said.

‘At present, Hackfall is not easily accessible as substantially overgrown areas block the range of views and access. Structures, water features and paths all require conservation work. In this project, after the initial start-up, the Woodland Trust will take a supportive role as the Hackfall Trust manages the project.’

NB.The Woodland Trust have obtained planning consent from Harrogate Borough Council to commence work on the weirs and to fell some of the trees in Hackfall.